Alex is a being of unknown origin and nature that has disguised himself as both a rook and an Alexornis. He is voiced by John Leguzamo.

Alex is the narrator of the movie, and Patchi's best friend. Several times, he's had several negative encounters with other animals, like almost getting eaten by a Gorgosaurus and getting knocked out of the sky by some Quetzalcoatlus. He also enjoys eating dinosaurs' tooth decay and nasal mucus.

Several times, he has shown that it's difficult for him to take some predators seriously, such as a brief scene where he makes fun of Gorgon's tiny arms.

His exact nature is unknown, as in the bizarre universe of the film. He is shown to be a (totally unexplained) talking rook who can shapeshift into an Alexornis, travel through time, and psychicly communicate to people as well as dinosaurs. He is implied to be some spiritual guide for Ricky.

His intelgiance far suprass his kind able to know many types of dinosaur features and charactics. He shows great useful opions to help out with his best friend Patchy. He has normal ability of flight and speed. His hunting ability is very good capturing small bugs in a flash. With lack of strength of his small size he makes its up for brains because of Patchy being large size and brute strength help him to find his inner strength for the ones he loves of his brother to protect him from Gorgon.

Alex as a rook in the present day 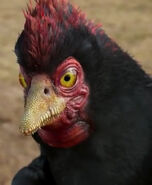