Walking With Wikis
Register
Don't have an account?
Sign In
Advertisement
in: Dinosaurs, Carnosaurs, Walking with Monsters Animals,
and 39 more

Allosaurus was a large carnivorous dinosaur (a carnosaur) of the Late Jurassic period.

The name Allosaurus (al-o-soar-us) means "different lizard" and was considered one of, if not, the largest predator that lived on the land, in the Late Jurassic Era, 165,000,000-145,000,000 BCE. Allosaurus was also the first giant predatory dinosaur to walk North America. It was the top predator and King of the Jurassic. The largest specimens grew to at least 13 meters (43 feet) long, making it one of, if not, the biggest Jurassic predator on the landscape, almost as big as Tyrannosaurus rex of the later Cretaceous period, but with a more lightweight build and a relatively weaker bite (3600 N) (even than a lion whose bite is 4200 N), designed to rip flesh rather than to crush bone, meaning the animal itself was incapable of biting through bone. An individual named Big Al was just a sub-adult when it died, yet it had 19 injuries and signs of various diseases. Allosaurus had distinctive crests in front of his eyes for display. They were probably pack hunters and used their numbers to catch larger animals such as juvenile and even adult Apatosaurus, Diplodocus, and Brachiosaurus. Proof of this was shown in the Cleveland Lloyd-Quarry with 75% of the bones belonged to Allosaurus. Though, not everyone agrees and think that like modern animals, they showed aggression to each other.

The Kings of the Jurassic Era, these giant, 8-13 meter long, carnivorous dinosaurs were the lions of the Jurassic, the top predators of their age. At 2-5 tonnes, they were such massive predators and as quick and as agile as their little ancestors Coelophysis and Liliensternus. Allosaurus had to eat their own weight in food every month.

Allosaurus was mostly found in many parts of North America including Colorado, Utah, Wyoming, Montana, Dakota, Texas, and other parts of the U.S. It also lived in Europe.

In seven short years, an adult individual of Allosaurus measured 4.5–5 m tall, was over 8–13 m long and weighed up to 3-5 tonnes in weight. Moreover, the body of this dinosaur was agile and flexible enough for them to be the most successful, best-adapted predators of its time.

One basic features of Allosaurus was its teeth, which were long, sharp, serrated, and built more knives to tear and slice up flesh from the bodies of its victims. The claws of its three-fingered hands were long and sharp, helping not only leave scars and slice open flesh but since its arms were opposal, helping it to actually cling on to its victims. Its feet were designed for speed enabling 34 km/ph and were fast enough to help it run long distances, and can leap and jump short-distances when close-contact with its prey. Its tail was long and strong enough to keep balance while running, and could use it to change directions quickly.

As young Allosaurus reached their second year of life, they grew to measure almost 3 meters (10 feet) in length and insects would no longer be on the menu. They'd be looking for dinosaur flesh.

By the time a young Allosaurus was five years old, although they'd reach nine meters (30 feet) long, they would be nearly fully grown.

Sexual maturity was dependent on an Allosaurus size and at 10 meters (33 feet) long, Allosaurs were well on the way to be big enough, but by that time, they were more like mature adolescents.

When Allosaurus reached at least 11 meters (36 feet) long, they could quickly establish their dominance over predatory dinosaurs, especially other allosaurs. When predators get to the size of a fully grown Allosaurus, which is about 11–13 meters (36-43 feet) long, most of those predators rarely have to bring down their own food, though they do so anyway. They just as often scavenge other kills.

Allosaurus lived alongside other large carnivorous dinosaurs such as Saurophaganax, Ceratosaurus, and Torvosaurus, though Allosaurus wouldn't be in direct competition with the other theropods. Paleontologists have always been puzzled why so many predators could fit in a single ecosystem, though like modern ecosystems there are such things as niche partitioning, where different carnivores hunt different prey and try to keep out of each others way whenever possible.

Behaviorally Allosaaurus appear to have been highly aggressive. It may have been the apex predator of its environment. Evidence for this comes from the high number of injuries typically found in allosaurs. The number of injuries found in allosaur bones is generally higher than in other smaller theropods of its time like "Ceratosaurus". Therefore it is logical to assume that allosaurs lived very violent lives, not unlike those experienced modern apex predators like lions and tigers. However many of those it preyed on were much larger and heavier than itself. So it is commonly believed that like many large theropods, Allosaurus hunted in packs to bring down the more powerful prey sources such as the larger sauropods and the armored stegosaurs.

The high number of injuries suggests that Allosaurus would have attacked just about anything that moved. It also tells scientists something about possible killing methods for the species. Also the strength of its bite is revealing as well. Allosaurus had a surprisingly weak bite force for their size. This means that allosaurs would not have had the luxury of being able to kill with a bite to the neck like the later tyrannosaurs, and as they obviously did not have the 'killing claw' of the dromaeosaurs like "Deinonychus" they could not have killed with a stab to a major artery. So the animals would have had little choice but to grabble with their prey, and the claws on their fingers were similar in shape to eagle's claws, and most likely used for gripping, just like eagle talons. The high number of injuries in allosaur skeletons support this theory. Allosaurus also could open their jaws surprisingly wide, which allowed the animal to possibly use its jaws to rip off thin strips of flesh from its victim, which if done several times in a single attack would cause massive blood loss and ultimately the death of the prey animal. The ripping jaws and grappling hook like claws means that once an allosaur had caught its prey, the prey was doomed if it could not shake its attacker off.

Most Allosaurus bones and skeletons found, were covered in injuries, possibly from battles with other dangerous prey and from even its own species i.e. a sub-adult "Big Al" was found with about 19 injuries including a swollen, infected, toe-bone, broken-healed arm, neck injuries and even infected rib bones. Thus, it became the main antagonist of Time of the Titans and the protagonist of the The Ballad of Big Al. (Later on, footage from Ballad of Big Al would be used in the conclusion of the Walking with Monsters series, where an Euparkeria was shown 'evolving' into an Allosaurus that went on to stalk a pair of stegosaurs.)

(A cousin of Allosaurus, known as 'Polar Allosaur' or Australovenator was shown in Walking with Dinosaurs ep. 5, based on the same basic model as Allosaurus itself.)

In the episode "Extreme Dinosaurs", the model for Allosaurus was recolored with a shade of green and used for Mapusaurus.

In the 2001 remake of the famous novel, the Allosaurus in the miniseries is a modified form of the Ballad of Big Al model.

A toy of Allosaurus was made by Toyway for their Walking with Dinosaurs line. 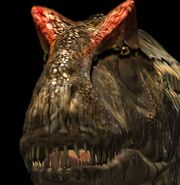 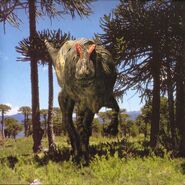 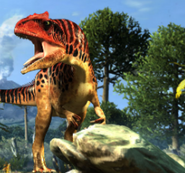 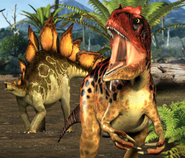 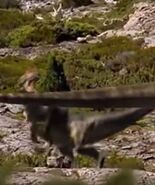 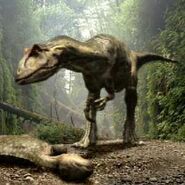 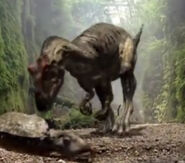 Walking With Dinosaurs: The Arena Spectacular 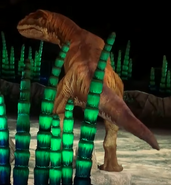 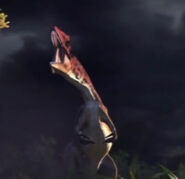 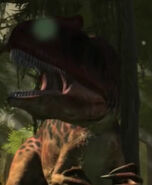 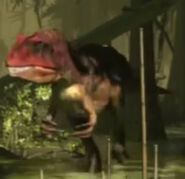 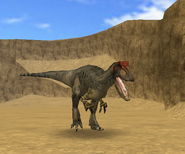 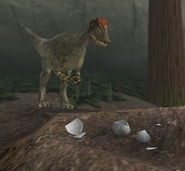 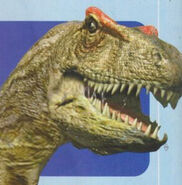 Allosaurus in the Official Sticker Album