Walking With Wikis
Register
Don't have an account?
Sign In
Advertisement
in: Walking with Beasts Animals, Walking with Cavemen Animals, Mammals,
and 21 more

The Complete Guide to Prehistoric Life
Ancylotherium was a prehistoric mammal featured in the Walking with Series.

Ancylotherium appeared in Africa a little more than 3 million years ago, as featured in the fourth episode of Walking with Beasts and the first two episodes of Walking with Cavemen (stock footage only).

Ancylotheirium was known to be one of the last chalicotheres: it was a relative of the knuckle-walking species from the third episode of Walking with Beasts. Nevertheless, Ancylotherium itself walked only on all fours and was built more conservatively than its knuckle-walking relatives.

Ancylotherium had short back legs and longer front legs; this enabled it to feed easier on bushes and trees of prehistoric East Africa, where it lived.

Although it was a relatively big animal (2 m tall), it was a very cautious one. It lived side by side with australopithecines as featured in Impossible Pictures. There were few animals that would tackle an adult Ancylotherium, but its calves were probably vulnerable to predators (i.e. Dinofelis). Because of this, Ancylotherium probably protected its youngsters, even though it was likely to be a solitary animal, and not a social one.

Ancylotherium died out at the end of Pliocene, roughly 2 MYA, when the more modern and advanced herbivores, such as antelope and zebra, evolved and outcompeted it for food resources.

In Walking with Beasts, Ancylotherium was also shown to be a territorial, but a timid creature, easily scared away even by an Australopithecus' intimidation display.

This episode used stock footage of Ancylotherium from Next of Kin. 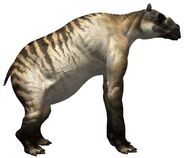 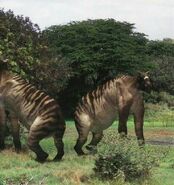 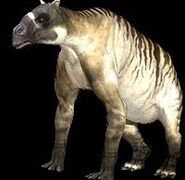