Walking With Wikis
Register
Don't have an account?
Sign In
Advertisement
in: Walking with Beasts Animals, Whale Killer animals, Cenozoic animals,
and 16 more


Andrewsarchus was a huge, carnivorous mammal that was initially thought as a Mesonychid, but is no longer classified as so. It was as tall as a horse and weighing close to a ton, featured in the second episode of Walking with Beasts.

Andrewsarchus was a meat-eater and a scavenger that despite their appearances, were not related to modern scavengers like coyotes dogs, wolves, or even hyenas. Bizarrely, they had hooves on their feet instead of claws. In fact, their nearest modern relatives are hoofed animals like sheep and goats,

as they were related to modern day ungulates (hoofed mammals) on one hand, and to cetaceans (whales and dolphins) on the other. They are, in a sense, sheep in wolf's clothing. Roy Chapman Andrews discovered in the 1920's in Mongolia and it got named after himself (AndrewsarchusmeansAndrews' beast). Andrewsarchuslived in Mongolia in the late Eocene, from 40 to 35 MYA. At about 5.5 meters long, 2 meters tall and weighting 1 tonne, Andrewsarchus was the largest land mammalian carnivore ever to walk on the Earth.

A pair of these animals harassed a Embolotherium herd and another had hunted sea turtles on the beach earlier. The narrator adds, that scavengers usually go through periods of drought relatively well, but Andrewsarchus failed to do - he was the last of a dying breed, his niche was taken over by new mammals, such as Hyaenodon and Entelodont, introduced in the next episode.

Read more at the Carnivores Wiki 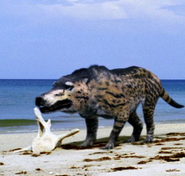