Walking With Wikis
Register
Don't have an account?
Sign In
Advertisement
in: Pterosaurs, Walking with Dinosaurs Animals, Carnivores,
and 22 more

Anurognathus is a genus of rhamphorhynchoid pterosaur, which lived during the late Jurassic period (154-130 MYA) in what is now Germany.

Anurognathus is a genus of small pterosaur that lived during the Tithonian stage of the late Jurassic period. Anurognathus was first named and described by Ludwig Döderlein in 1923.

The type species is Anurognathus ammoni. The genus name Anurognathus is derived from the Greek αν/an- ("without"), оυρα/oura ("tail"), and γναθος/gnathos ("jaw") in reference to its unusually small tail relative to other "rhamphorhynchoids" (i.e. basal) pterosaurs. The specific name ammoni honours the Bavarian geologist Ludwig von Ammon, from whose collection Döderlein had acquired the fossil in 1922.

Anurognathus was one of the smallest pterosaurs, having a wingspan of about 50 centimeters. Because of that, Anurognathus was near the bottom of the food chain. However, Anurognathus would usually be safe from predators as it was a nocturnal, somewhat bat-like insectivore.

In the series it was inaccurately depicted as a creature that lived its entire life on the backs of sauropods.

They got their food source from various parasites that would prey on their homes, unlike their slightly more accurate depiction in The Ballad of Big Al, where they were shown to live without any symbionts and hunt for their food (while also being prey for such predators as Al).

Years later, when the episode's lead, an adolescent female Diplodocus, grew up, an Anurognathus was seen flying onto her to feed.

Anurognathus was constantly seen as a background creature in the special, being identified simply as a pterosaur unlike in Time of the Titans, where it was referred to by its scientific name. A notable appearance was

where one was seen feeding on the decaying and dried-up corpse of a Dryosaurus. But, then, suddenly, Big Al swiftly snatched the Anurognathus and devoured it.

Anurognathus was seen at the end of the episode in the Jurassic landscape. The scene shown in the episode was stock footage from Time of the Titans. 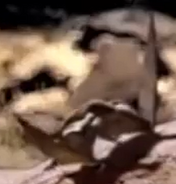