Walking With Wikis
Register
Don't have an account?
Sign In
Advertisement
in: Ballad of Big Al Animals, Herbivores, Mesozoic animals,
and 13 more

The Ballad of Big Al
Walking with Dinosaurs: Inside Their World
Apatosaurus (name meaning "deceptive lizard"), is a genus of sauropod dinosaur which lived during the late Jurassic period in the United States of America.

Apatosaurus was a sauropod dinosaur. It was one of the largest land animals that ever existed, with an average length of at least 27 meters (90 ft) and a mass of 20-30 tons. There are many larger Apatosaurus specimens that may represent adult animals close to 30 meters long and 50 tons in weight.

Apatosaurus were dinosaurs that traveled in herds as the other sauropods did. They were giant fortresses of flesh, but were too large for most predators to attack, even by fully grown Allosaurus.

The name Apatosaurus means 'deceptive lizard', so-given by Othniel Marsh in 1877 because the chevron bones were similar to those of a prehistoric marine lizard, Mosasaurus. Two years later, Marsh found more sauropod bones and named them Brontosaurus. Over the years, Brontosaurus was thought to be a synonym of Apatosaurus until 2015 when an extensive study proved that Brontosaurus was indeed distinct from Apatosaurus.

Apatosaurus appeared as a background dinosaur numerous times in the special. A herd of them was seen traveling on the open prairies, through green lands and through a desert during a drought.

Apatosaurus is one of the viewable dinosaurs in this app.

Read more at the When Dinosaurs Roamed America Wiki

Apatosaurus was one of the dinosaurs featured in the Late Jurassic segment of the film.

The Land Before Time

Read more at the The Land Before Time Wiki 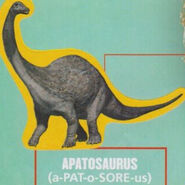