Walking With Wikis
Register
Don't have an account?
Sign In
Advertisement
in: Walking with Beasts Animals, Herbivores, Eocene Animals,
and 13 more

Walking with Beasts (Whale Killer)
The genus Apidium (from Latin for "small bull", as the first fossils were thought to be from a type of a cow) is that of at least three extinct primates living in the early Oligocene, roughly 30 to 28 MYA. Apidium fossils are common in the Fayoum deposits of Egypt. Fossils of the earlier species, Apidium moustafai, are rare; fossils of the later species Apidium phiomense are fairly common.

Apidium is placed within the Parapithecidae family in the parvorder Catarrhini, making it closely related to the modern Old World haplorrhine primates, although roughly equally close to the Old World monkeys which it closely resembles, and to the apes.

The Apidium species were well adapted to life in what once were the tropical forests of North Africa, but now are the Sahara desert. The limbs of the Apidium show an ability to run along branches and leap between trees. Males were much larger than females, and had large canine teeth. Its hind feet were particularly good at grasping branches, ensuring that it didn't fall to the forest floor below, where predators might be waiting.

Unlike their nocturnal ancestors (e.g. Godinotia), these primates appear to have been diurnal, using their keen eyesight to find ripe fruit and insects in the trees, which it would then eat using its specially rounded and flattened teeth. Much of its waking time would have been spent in the search for food, and it may have had to wander over a wide area to satisfy its hunger

Male Apidium were bigger than the females, which, by comparing them with living primates, suggests that they probably lived troops, where a small number of males would have had control over several females. The males had large canine teeth, which they would use to fight one another over mating rights and for the ultimate right to control a particular group of female Apidium.

A group of Apidium appear when the female Basilosaurus swims into the mangroves to hunt. They see her and raise the alarm, which is ignored by the Moeritherium, because the latter are too large to be bothered by the mangroves' usual predators, small sharks and crocodiles.

Later, as the water levels rise and some channels become too wide to jump over, the Apidium are forced to go lower to the water's surface to cross them - and a shark attacks and eats one of them, panicking the rest of them. 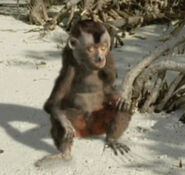