Walking With Wikis
Register
Don't have an account?
Sign In
Advertisement
in: Featured Articles, Sea Monsters Animals, Creatures,
and 15 more

Sea Monsters: Into the Jaws of Death

Arsinoitherium was a paenungulate from the Eocene. It is significant for having a hollow, double horn on its head.

Arsinoitherium was shape of a modern rhinoceros. However, its legs were better adapted to life in the water rather than on land.

It had two, small knobs above its double horn. Its double horn was hollow. Instead of a nose, it had a small nasal proboscis. Its teeth were designed to eat specific types of vegetation.

Arsinoitherium was almost entirely grey with a white underbelly and marks across the side of its face.

Arsinoitherium had a face that looked like a rhino's, lived like a hippopotamus but was more closely related to the elephant. Due to the structure of its legs, it was clumsy on land and was better off in the water. In the water, its legs were perfect propulsion tools.

The teeth of Arsinoitherium were unique. Because of this, they were restricted to specific types of vegetation. It preferred eating fruit over leaves or twigs.

The most striking feature of Arsinoitherium was its large, double horn on its head. The horn was hollow so it is possible that the animal could produce loud noises, like some of the later hadrosaur. Despite the impressive display, the horn blocked its sight and Arsinoitherium would have to constantly turn its head to see what was in front of it.

Soon after entering the Eocene, Nigel Marven found a set of footprints in the sand. He followed the trail until he found a pile of herbivore dung. Nigel examined the dung and determined that it was a fruit eater.

Nigel soon found an Arsinoitherium. In an experiment, Nigel took out an apple and offered it to the large herbivore. Unfortunately, the Arsinoitherium identified Nigel as a threat and charged at him. Nigel retreated to the trees while the fat, bulky mammal ran through a ditch and toppled over. 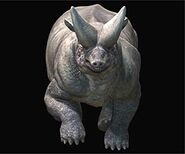