Walking With Wikis
Register
Don't have an account?
Sign In
Advertisement
in: Characters, Australopithecus, Walking with Cavemen Animals,
and 23 more

Between Human and Apes

The Complete Guide to Prehistoric Life
Australopithecus afarensis was a genus of a prehistoric ape (primate) that lived in Africa.

What revolutionizes Australopithecus from the modern non-human apes is the fact that they had the ability to walk upright on two legs. Australopithecus also formed tribes or social groups that contain large numbers depending on survival circumstance, much like modern pygmy chimpanzees (bonobos), common chimpanzees, and gorillas. Just like them, the males formed harem-like groups of females, with the females moving from group to group to propagate their genes. (Another prehistoric ape, Paranthropus boisei, did the same thing.) They also were probably capable of making (and utilizing) crude tools, as shown on the fourth episode of Walking with Beasts, where they used sticks to dig for roots, as modern apes sometimes do.  With a brain about the size of a modern chimpanzee, it was nonetheless a distant ancestor/relative of modern people.

They weren't predators yet, and were hunted by Dinofelis (or modern leopards, lions, etc.), based on fossilized evidence of Australopithecus remains found with the predators' teeth marks on them. Other predators, including modern crocodiles (their modern species had fully evolved by then, like Crocodylus thorbjarnarsoni), probably hunted them too, as shown on the first episode of Walking with Cavemen. 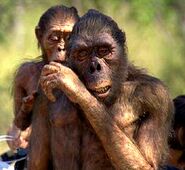