Walking With Wikis
Register
Don't have an account?
Sign In
Advertisement
in: Mammals, Whales, Walking with Beasts Animals,
and 27 more


Basilosaurus was a large, predatory whale from the Eocene. It was the top predator in the Tethys ocean during its existence.

Measuring over 18m (60 feet) in length and weighing approximately 15 tons, Basilosaurus was a large, carnivorous whale. It had a very large skull with strong jaws, which were lined with large teeth used to severely injure its victim. It also had a streamlined, serpentine body shape which was useful in making it a swift and deadly predator.

Basilosaurus had small hind paddles which were useless for aiding in locomotion but were extremely important during copulation. It also had a long and strong fluke used to propel its weight and size through the water.

Basilosaurus was a solitary animal. Unlike most of the modern species of cetaceans, interaction between members of the same kind were often hostile and lethal. The only time this animal would interact was during courtship and mating. During these mating competitions, the larger and older male would win the right to mate with the target female.

Both a memento of its land-dwelling ancestors and a useful tool during copulation, Basilosaurus retained two, small hind flippers from its ancestors. Due to their tiny size, they were useless as a means of steering while swimming. However, during mating, the mating Basilosaurus would use the flippers to lock onto each other so one does not slip off.

Being the largest Eocene carnivore, Basilosaurus was a deadly predator and its favored prey was its smaller relative - Dorudon. However, its diet also extended to sharks, primitive proboscideans like Moeritherium which lived in the shallow mangrove swamps as well as other types of marine animal.

A female Basilosaurus ambushed a pair of hunting sharks and killed both of them via flinging them out of the water. She then swam off after feeding.

Later, the female Basilosaurus was pursued by two young males who were eager to mate. As the excited males surrounded her, an older male appeared and won the right to mate with the female. As the male maneuvered into position, the pair locked onto each other using their small hind legs. After mating and causing large splashes on the water's surface, the pair disbanded.

Months later, with the erratic currents causing major disarray in the fish stocks, the female Basilosaurus had resorted to searching for food in shallow mangrove swamps. Whilst swimming through the vast network of waterways, her presence alerted a clan of Apidium but barely phased a group of Moeritherium.

Later, the female Basilosaurus chased a Moeritherium and left it stranded on a small sandbank. As the tide came in, the Basilosaurus attempted to attack the Moeritherium but unfortunately, the whale launched her attack too soon and lost the kill.

The whale fled temporarily and quickly returned and killed several of the Dorudon calves that were being born. After several days of merciless killing, the female left satisfied that her killings would further the survival of her own unborn offspring.

The female Basilosaurus is last seen swimming with her newborn calf.

In Walking with Cavemen

Basilosaurus was briefly seen as the climate changed. The scene featuring it was stock footage from Walking with Beasts.

In the Eocene, Nigel Marven lowered a microphone into the water and recorded the calls of a Basilosaurus. He then played the audio back on an underwater speaker.

Later, The Ancient Mariner was attacked by a male Basilosaurus. Nigel quickly geared up and dived into the water. Using the boat as a shield, the whale appeared and approached the speaker that was still playing audio of a Basilosaurus. The distressed whale bit off the speaker and swam off with it.

Basilosaurus appeared in Skeleton Jigsaw as one of the creature skeletons you can assemble.

Stock footage of Basilosaurus' appearances in Walking with Beasts and Sea Monsters was reused in the trivia minigames of the Sea Monsters adventure game.

When Basilosaurus was first discovered, it was thought to be a sea serpent or a reptile, hence its name, "king lizard". When the truth about it being a mammal was uncovered, it was renamed briefly into Zeuglodon, "yoked tooth", but eventually the paleontologists reverted back to its original name, Basilosaurus.

Basilosaurus could not live out in the open ocean as portrayed in Whale Killer. A study of its vertebrae reveals that it was too weak to specialize in deep diving. It instead stayed close to the shore, as seen when the female Basilosaurus in Walking with Beasts hunted in the mangrove swamps of Egypt.[1]

Basilosaurus' design in the Walking with... Series is reused in several installments of the popular video game series Scribblenauts.

In 2005, stamps from Liberia reused images of many Walking with... animals. Including Basilosaurus.[2]

The Basilosaurus takes the speaker. 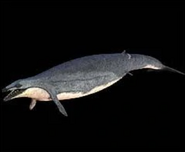