Walking With Wikis
Register
Don't have an account?
Sign In
Advertisement
in: Dinosaurs, Ballad of Big Al Animals, Jurassic animals,
and 15 more

Big Al is a young Allosaurus with 19 injuries that was found in Wyoming. Though surviving for a long time, even with 18 nearly healed injuries, his 19th injury, his middle toe on his right foot, which he broke, and it got infected, it ended up killing him due to starvation. He's the titular character of Ballad of Big Al: Walking with Dinosaurs special. He is the first dinosaur from WWD series to receive a name and a personality. Later other creatures would get the same thing. 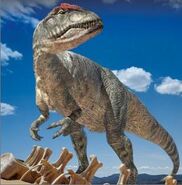 Big Al getting attacked by a Female Allosaurus

Big Al and his pack vs. a lone Diplodocus

Recent cover of the DVD

Big Al and another Allosaurus 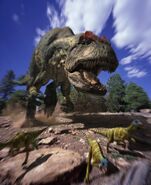 Big Als Ghost next to the Skeleton 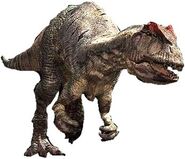 A very sad Al head lying in a dusty forgotten warehouse, somewhere in the UK