Walking With Wikis
Register
Don't have an account?
Sign In
Advertisement
in: Creatures, Birds, Taxonomic groups,
and 4 more 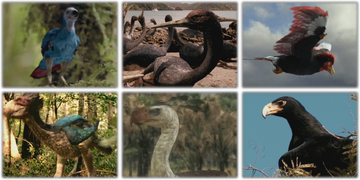 ​​Birds are a family of animals that descended from the dinosaurs. They are found worldwide.

There are many birds that exist today. They include the Oxpecker, the Black Eagle, the Zebra Finch and the Vulture.

During the Cretaceous, Iberomesornis lived in Europe, and the flightless, aquatic Hesperornis lived on the shores of North America. Alexornis was a toothed bird that lived in Alaska.

After the Cretaceous mass extinction, Gastornis evolved to become the dominant omnivore/herbivore in Eurasia and North America during the Eocene to fill in the niche left behind by the dinosaurs.

Ancestors of birds like the Black Eagle and Vulture lived in Pliocene, scavenging on carcasses of ungulates and primates killed by Dinofelis, and hunting their own prey.

Large, flightless Terror Birds like Phorusrhacos appeared in South America and eventually spread to North America after the two continents connected. They were the top predator in their ecosystems until being ousted by Smilodon.