Walking With Wikis
Register
Don't have an account?
Sign In
Advertisement
in: Herbivores, Walking with Dinosaurs Animals, Time of the Titans animals,
and 17 more

Vertical neck with a nasal crest.

As 13-15-meter-high sauropods that specialized in grazing on the treetops, Brachiosaurus could effortlessly harvest cones and fresh leaves no other dinosaur can reach. These giants were feeding almost constantly to sustain its enormous bulk. And they had grown enormous on it. These dinosaurs, standing nearly 40–50 ft. tall, were as tall as a three to four story building, measuring 90 ft. long, as long as two buses, and weighing 70 tons, they where enormous sauropods, thus making them the largest land animals that have ever existed, at least of their time. Brachiosaurus was one of the tallest dinosaurs. At 12–15 meters high and 24–27 meters long, and 40-55 tons, Brachiosaurus was one of the most massive animals in the Late Jurassic period (153-135 MYA). For a while, it was considered the biggest prehistoric animal on Earth, but this title belongs to its cousins the titanosaurs and possibly the Diplodocoids (Brachiosaurus itself belonged to the brachiosaurid branch of the sauropod family). However, Brachiosaurus was the largest animal that ever walked North America.

Brachiosaurus hatchlings came from eggs the size of a football. When adolescents separated themselves from the herd, they were vulnerable to attack. But the advantage to being a member of the herd was that there is always an adult nearby to help.

Named for the large bones of its forelegs, this creature was an enormous sauropod. Brachiosaurus held its neck in a vertical position and was adapted to live on land with similarities to a modern giraffe. Like most sauropod dinosaurs, Brachiosaurus was a quadrupedal animal with a small skull, a long neck, a long, muscular tail and slender, columnar limbs. The skull had a robust, wide muzzle and thick jaw bones, with spoon–shaped teeth. As in Giraffatitan, there was an arch of bone over the snout and in front of the eyes that encircled the nasal opening, although this arch was not as large as in its relative. Large air sacs connected to the lung system were present in the neck, invading the vertebrae and ribs, greatly reducing the overall density. Unusually for a sauropod, the forelimbs were longer than the hind limbs.

A Brachiosaurus was seen treading past a creche of Diplodocus on the open prairies. The Brachiosaurus then walked past another one of its genus who was browsing on the treetops.

Brachiosaurus appeared several times as a background animal. One notable appearance was when a Brachiosaurus was seen bathing in a lake.

Brachiosaurus was seen at the end of the episode in the Jurassic landscape. The scene shown in the episode was stock footage from Time of the Titans.

Brachiosaurus is one of the dinosaurs featured in this app.

Walking with Dinosaurs: The Arena Spectacular

Brachiosaurus is one of the characters in the live show.

Brachiosaurus in the water. 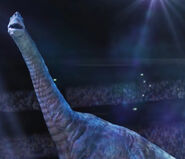 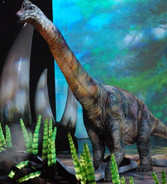 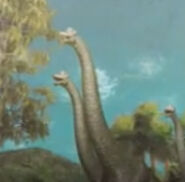