Ouranosaurus and Sauropods such as Paralititan

The Brothers
Carcharodontosaurus (meaning "Shark-toothed lizard") were deadly predatory theropod Dinosaurs, with a long maw full of serrated, knife-like teeth. A combination of size, speed and strength, they could potentially hunt alone or in packs. They were larger than Tyrannosaurus rex, at 13.5 metres long, making them the 3rd largest land carnivore. They lived in lands what are now part of Egypt, Tunisia, Niger, Morocco, Libya and Algeria, approximately 102-89 Ma. Along the River of Giants, Carcharodontosaurus roamed.

Carcharodontosaurus had a 1.8 metre long skull, currently making it the theropod with the second largest skull, right after its close cousin, Giganotosaurus. It was a carnosaur, related to Allosaurus, Australovenator, Mapusaurus, and Giganotosaurus. It had a long, thin skull with over fifty 20 cm, blade-like teeth in its powerful jaws. It had somewhat short arms with 3 sharp talons on each hand. It had long, powerful legs, suggesting speed for such a big animal. It could grow 5.2 metres tall and weigh up to 4-5 tonnes. The shark-toothed lizard also had a long tail designed for balance while moving, and to help counterbalance it's large head.

It hunted large sauropods like Paralititan, and often fought amongst themselves, often for food, territory, or mates, like all theropods did. It also probably fought among other carnivores, like Sarcosuchus or Spinosaurus, for food and territory as well. It had the niche of apex predator in its environment.

Carcharodontosaurus appeared in concept art for Wonderbook, with most of it being focused on a pair of brothers, but was cut for unknown reasons. It was likely replaced with Mapusaurus 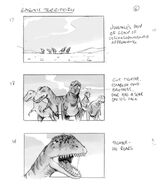 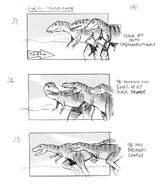 Although Carcharodontosaurus never made an appearance in the original Walking with Dinosaurs series or any of its specials.