Walking With Wikis
Register
Don't have an account?
Sign In
Advertisement
in: Carnivores, Animals from North America, Ceratosaurs,
and 16 more

Ceratosaurus is a theropod dinosaur that is featured in Wonderbook: Walking with Dinosaurs.

Medium sized; two small crests; large horn at the front of it's snout

Ceratosaurus /ˌsɛrətɵˈsɔrəs/ meaning "horned lizard", in reference to the horn on its nose (Greek κερας/κερατος, keras/keratos meaning "horn" and σαυρος/sauros meaning "lizard"), was a large but medium-sized predatory theropod dinosaur from the Late Jurassic period (Kimmeridgian to Tithonian), found in the Morrison Formation of North America, and the Lourinhã Formation of Portugal and also the Tendaguru Formation in Tanzania. It was characterized by large jaws with blade-like teeth, a large, blade-like horn on the snout and a pair of hornlets over the eyes. The forelimbs were powerfully built but very short. The bones of the sacrum were fused (synsacrum) and the pelvic bones were fused together and to this structure (Sereno 1997) (i.e. similar to modern birds). A row of small osteoderms was present down the middle of the back.

Its proportions and biology were somewhat like a miniature T. rex, but with longer front legs that had four fingers rather than just two.

Robert Bakker speculates that it was a lungfish-hunting specialist or that it possibly lived like modern crocodiles do (because of its tail being more flexible than most Theropods), but no other palaeontologists agree with this.

In Chapter 3 : Terror in the Swamp, a Ceratosaurus named Cactus preys on an adult bull Stegosaurus named Farallon and his son Kula, along with an Allosaurus.

Ceratosaurus is one of the viewable dinosaurs in the app. 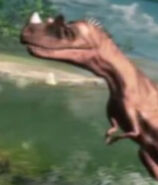 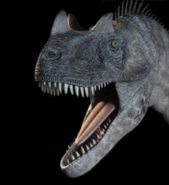 Ceratosaurus being attacked by an Allosaurus

Ceratosaurus was one of the dinosaurs featured on that show.

Ceratosaurus was one of the dinosaurs featured in the movie.