Walking With Wikis
Register
Don't have an account?
Sign In
Advertisement
in: Walking with Dinosaurs: The Movie Animals, Creatures, Dinosaur Gallery Animals,
and 27 more

Similar to other Oviraptorosaurs

Walking with Dinosaurs: The Movie
Chirostenotes was an oviraptorid dinosaur from Canada.

A group are seen at night in forest preying on a pair of juvenile Pachyrhinosaurus.

At almost 3 meters in length, it was almost a third larger than its Asian cousins (such as Oviraptor). It is also a member of the caenagnathid family - a side branch of the oviraptorids proper. As such it wasn't as highly specialized as Oviraptor and the rest of its Asian cousins, but it did have a spectacular crest (see the picture).

Chirostenotes was discovered for the first time in 1924, but it was recognized as a proper (and single) species only in 1988. 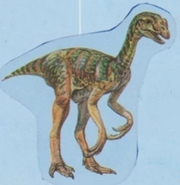