The Cretaceous time period was the third and final time period of the Mesozoic Era. It was preceded by the Jurassic and followered by the Paleocene Epoch. It began ~145 MYA and ended 65.5 MYA, lasting about 79.5 million years, making it not only the longest time period in the Mesozoic Era, but the entire Phanerozoic Eon as well.

The beginning of the Cretaceous was marked by a drought, followed by a rapid rise of the sea levels - one of the biggest in Earth's history - followed by a fall in the sea levels, due to a small-scale Ice Age. The seas of the Cretaceous were dominated by mollusks, Ammonites and Belemnites, bivalves and gastropods. Bony fish were wide-spread too, the reptiles continued to dominate on land, in the sea and in the air, but first true birds have also appeared, as did the modern mammals, monotreme (i.e. Steropodon), marsupial (i.e. Didelphodon) and placental (i.e. Purgatorius).

The first flowering plants also appeared during the Cretaceous time period, as their evolution was tied to the evolution of insects and other animal pollinators. At the same time, Cretaceous was marked by an equal large percentage of extinctions. By the end of this time period, all of the ammonites and almost all of belemnites, many of the Mesozoic 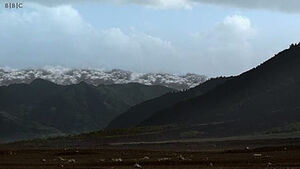 plankton species died out, as did all of the dinosaurs (besides the birds), marine reptiles, pterosaurs, multituberculate mammals. Among the plants many species of cycads, ginkgoes, seaweed, other plants perished as well. This was all due to the mass K-T extinction.