Walking With Wikis
Register
Don't have an account?
Sign In
Advertisement
in: Walking with Dinosaurs Animals, Carnivores, Sea Monsters Animals,
and 22 more

Similar to other long necked plesiosaurs


Cryptoclidus was an 26 foot, eight ton member of a plesiosaur genus from the Middle Jurassic period (180-145 MYA) English deposits.

At 4[1]-8 meters in length[2] (13[1]-26ft[2]) with a neck 2 meters long[1] and weighting 8 tonns,[2][3] Cryptoclidus was unlike other plesiosaurs because it had a seal-like body plan. This body-type allowed it to haul itself onto land, though they were rather cumbersome on land than in water.[3]

Cryptoclidus had a skin color that was blend of brown and dark gray with black spots and had a white underbelly.

Cryptoclidus would come onto land for various reasons. These reasons include to bask in the sun before returning to the water, to rest for the night,[2][3] evade predators, and probably even to breed.

[1] Cryptoclidus would hunt anchovy-sized fish,[1] squid,[1][2] and ammonites,[1] such as Perisphinctes.[2] Because of their body size[1], they were ambush predators,[1][2] though they could have searched soft seabead sediments for crabs, worms, and fish.[1] They were prey for the larger Liopleurodon.

Cryptoclidus was featured in the third episode of WWD. It was a stand-in for Plesiosaurus as a plesiosaur. It lived in a small colony, hunted fish underwater and came ashore at night to escape Liopleurodon. 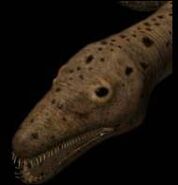