Walking With Wikis
Register
Don't have an account?
Sign In
Advertisement
in: Walking with Beasts Animals, Mammals, Creatures,
and 14 more

Resembles a cross between a bear and a dog

Cynodictis was considerably small compared to other members of its kind; only being slightly larger than the modern day opossum with a height of 30 centimetres (1 ft).[1]

It was one of the many species of a group of animals commonly known as "bear dogs", which, as the name suggests, had several characteristics of bears and dogs. But they were only related to the said animals, not ancestors or transitional forms.

Like bears, they walked on their feet, though both programs they appear in portray them as walking on their toes.

Cynodictis had great speed and it would use this speed to hunt its prey, such as rabbits and small rodents,[1] though they sometimes would scavenge.[2] Because of their small size, they feared the larger carnivores in their region, such as Hyaenodon.[2] It lived in dens in steep riverbanks that were built by itself lined with moulted fur and vegetation.[1] These dens would also used by Cynodictis mothers to raise their pups.

[1] [3][2] These bear dogs would give birth to up to five cubs who would be cared for by their mother for several months.

[1] A mother Cynodictis would be brave enough to attack animals as large as a juvenile Indricotherium to protect her young.[3] The cubs would feed on the milk of their mother in their early life before switching to food provided by their caretaker.

[1] There was always a risk of living in their dens, as they would sometimes be destroyed by flash floods which would kill the inhabitants inside.[1]

Cynodictis is a minor character in this episode. It is used to demonstrate just how large even a young Indricotherium is. An Entelodon and a female Indricotherium scared away a Cynodictis family from a watering hole and later on the mother Cynodictis scares away a juvenile indricothere from the family burrow.

When the rainy seasons come, however, the water level rises, floods the burrow and drowns the sleeping cubs. (In the book version the parent Cynodictis drowned as well.)

Despite the mother Cynodictis appearing three times in the episode, however, she is treated as three separate individuals by the narrator. 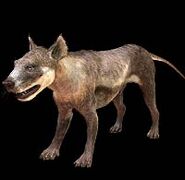 There are several inaccuracies with the Cynodictis in the series. First, it was seen walking on its toes like wolves and dogs. In reality, Cynodictis walked on its feet like bears and humans. Cynodictis also lived during the early Oligocene, and died out by the time featured in WWB; that is why it was identified only as a bear-dog in the series. Finally, Cynodictis did not live in North America like what The Complete Guide to Prehistoric Life states, though there was a species called Cynodictis angustidens that was described in 1887 by paleontologist O.C. Marsh

The model for Cynodictis was reused for the Unidentified creodont in Walking with Beasts'  first episode, New Dawn.

The color scheme of Cynodictis in Walking with Beasts was based on that of small members of the dog family like jackals.[7]