Walking With Wikis
Register
Don't have an account?
Sign In
Advertisement
in: Dinosaurs, Raptors, Animals from North America,
and 17 more

Long grasping arms with feathers; a large claw on the second toe of each foot.


Deinonychus (meaning “terrible claw”) was a dinosaur that appeared in the app Walking with Dinosaurs: Inside Their World - Narrated by Steven Fry and was mentioned in The Complete Guide To Prehistoric Life.

Deinonychus, meaning terrible claw, (/daɪˈnɒnɨkəs/ dy-NON-i-kəs; Greek: δεινός, 'terrible' and ὄνυξ, genitive ὄνυχος 'claw') is a genus of carnivorous dromaeosaurid dinosaurs. There is one described species, Deinonychus antirrhopus. These dinosaurs, which could grow up to 4 meters (13 ft) long, lived during the early Cretaceous period, about 130,000,000-95,000,000 BCE (from the mid-Aptian to early Albian stages). Fossils have been recovered from the U.S. states of Montana, Wyoming, and Oklahoma, in rocks of the Cloverly Formation and Antlers Formation, though teeth that may belong to Deinonychus have been found much farther east in Maryland.

Paleontologist John Ostrom's study of Deinonychus in the late 1960s revolutionized the way scientists thought about dinosaurs, leading to the "dinosaur renaissance" and igniting the debate on whether dinosaurs were warm-blooded or cold blooded. Before this, the popular conception of dinosaurs had been one of plodding, reptilian giants. Ostrom noted the small body, sleek, horizontal posture, ratite-like spine, and especially the enlarged raptorial claws on the feet, which suggested an active, agile predator.

The species name antirrhopus means "counter balance", which refers to Ostrom's idea about the function of the tail. As in other dromaeosaurids, the tail vertebrae have a series of ossified tendons and super-elongated bone processes. These features seemed to make the tail into a stiff counterbalance, but a fossil of the very closely related Velociraptor mongoliensis (IGM 100/986) has an articulated tail skeleton that is curved laterally in a long S–shape. This suggests that, in life, the tail could bend to the sides with a high degree of flexibility.

Deinonychus is one of the viewable dinosaurs in this app.

A Deinonychus approaching a Tenontosaurus 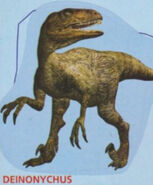 Deinonychus is one of the dinosaurs featured in this novel.

The episode "Gang Killer" was featured on Deinonychus and its predator-prey relationship with Tenontosaurus.