Walking With Wikis
Register
Don't have an account?
Sign In
Advertisement
in: Mammals, Elephants, Walking with Beasts Animals,
and 26 more

Miocene to Pleistocene
20 to 2mya

Deinotherium was a large proboscidean mammal. It had the basic body plan of a modern elephant except on a larger scale.

Unlike modern elephants, the tusks of Deinotherium were curved and pointed downwards. They also protruded from the tip of the lower jaw rather than the skull.

It was once thought that Deinotherium had a smaller trunk than most of its ancestors and relatives. However, this is now known to be false. Else, it would be able to drink water. Its ears were small, like a modern Asian Elephant's, which is very unusual for an animal living in very hot temperatures.

Deinotherium was a large mammal. It was the third largest land mammal ever to exist, only succeeded by Indricotherium and Palaeoloxodon. Due to this immense size and bulk, Deinotherium was the largest animal in its ecosystem.

Deinotherium, like its relatives, possessed a pair of tusks. However, these tusks were positioned on its lower jaw and were curved, facing downwards. This bizarre design was especially useful when it came to stripping bark off of tree trunks.

Like modern elephants, male Deinotherium would undergo musth when ready to mate. During these sessions, they would become extremely aggressive and would attack anything. The females also show some degree of aggression like modern elephant mothers, by just chasing other animals off. Juveniles were very scary for small to medium sized animals.

An adult Deinotherium was grazing near a pair of Ancylotherium.

Whilst a pair of Australopithecus and Ancylotherium were drinking from a water hole, a small herd of Deinotherium came past and an adolescent chased off the hominids.

When an Australopithecus clan were searching for a new place to live, they accidentally caught the attention of a male Deinotherium in musth. It chased the Australopithecus group up a tree. Unfortunately, a child of Babble's was left behind and was screeching. Babble tried to reach her child but she herself was chased by the angry Deinotherium. The constant screams by Babble's child attracted the attention of the proboscidean and he attacked the juvenile (although it was revealed to have survived the attack). The herbivore then left.

In Walking with Cavemen

Deinotherium appeared briefly as one of the many creatures that lived in the same environment as Australopithecus. The episode used stock footage from Walking with Beasts. 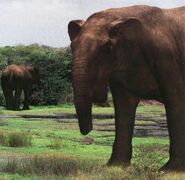