Walking With Wikis
Register
Don't have an account?
Sign In
Advertisement
in: Walking with Monsters Animals, Synapsids, Herbivores,
and 12 more

Diictodon was a prehistoric mammal-like reptile from what is now South Africa and Siberia.

Walking with Monsters (Clash of Titans)

hardy, little burrowing creatures were more adaptable then the other animals in its time period. They lived as pairs in spiral-shaped burrows dug deep underground, which remained cool even in the desert heat. This way of life allowed them to survive in sand storms, and they found plant tubers that held enough water and nutrients to keep them going for several months. Their hearing was linked to tiny bones in their lower jaw. It ate off of roots under the ground.  It lived during the Permian period.

Several pairs of Diictodon could be neighbours, but that didn't make them a colony. They competed ferociously for the sparse vegetation that is their food. And this frequently led to confrontations. These clashes were one reason why both males and females sported a pair of short tusks. However Diictodon did have one big advantage when living in a crowd. If a neighbor spotted danger, then everyone soon knew about it and could take action to protect themselves.

Diictodons lived in spiral-shaped burrows dug deep underground. This way of life allowed them to survive in sand storms, and they sought out plant tubers that held enough water and nutrients to keep them going for several months. Diictodon was an evolutionary cousin to Lystrosaurus.

Diictodon was seen as prey in the clash of the titans for Gorgonopsid.

Diictodon appeared throughout the third season of Primeval.  In the third episode, a colony of Diictodon come through an anomaly that opened in a hospital and start burrowing into the walls.  They caused a disruption in the hospital when they started feeding on the electrical cords.  The incursion was dealt with but two individuals were unable to return to their time.  They were later dubbed Sid and Nancy. They appeared in some of the following episodes under Connor's possession. 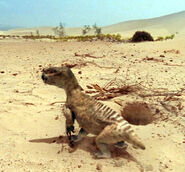 Sometimes the Diictodon sound like they're saying "hi" or "hey" when making their little noises.