Walking With Wikis
Register
Don't have an account?
Sign In
Advertisement
in: Walking with Beasts Animals, Walking with Cavemen Animals, Carnivores,
and 28 more

Dinofelis was a medium-sized, but powerful, cat that possessed short, but prominent saber teeth.

They were more short, broad and flat than the sabres of the much bigger and better known Smilodon, and less prone to breaking. As a consequence, Dinofelis was a solitary hunter, often running down its prey in a manner similar to modern pantherine cats (such as tigers and leopards) before delivering the killing blow.

Regardless, Dinofelis was only distantly related to Smilodon, and belonged to a completely different branch of the feline family, called the Scimitar Cats, to which the Homotherium of the Pleistocene, also belonged. It lived in forests and open woodlands. It was a lone hunter, and would stalk its prey carefully before pouncing and swiftly killing it with its sharp claws. The front limbs of Dinofelis were particularly strong and muscular, allowing it to deliver debilitating strikes with its claws, and also to pin struggling prey to the ground. Its short sabre-teeth could have been used to help deliver fatal wounds, especially to the neck region. The favorite prey of Dinofelis were large mammals, such as antelope, young elephants and rhinoceros, zebras, giraffids, and baboons. It was once thought to have hunted Australopithecus aferensis commonly, though this is false. It was not a fast runner, so would spend most of its time stalking its victims before making a sudden leap.

Dinofelis appears in episode 4 of Walking with Beasts, (Next of Kin), where it stalks and kills one Australopithecus.

It later returns to menace the same group, but they assemble and collaboratively chase it away by throwing stones. 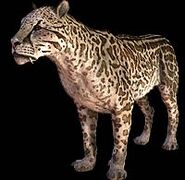 A Dinofelis being fednded off by a group of Australopithecus

Dinofelis appears briefly in Walking with Cavemen, being stated as one of the species that will go extinct along with Paranthropus boisei, although WWC reuses clips form Walking with Beasts, and makes no new animations.

Stock footage of Dinofelis' appearance in WWB was reused in Monsters we Met.