Walking With Wikis
Register
Don't have an account?
Sign In
Advertisement
in: Featured Articles, Dinosaur Gallery Animals, Creatures,
and 33 more

One Female of a creche

Walking with Dinosaurs: (New Blood, Time of the Titans)
The Ballad of Big Al
Sea Monsters
Walking with Monsters


Diplodocus was a 30 meters (100 feet) long, 10-20 tonne sauropod dinosaur from the late Jurassic time period (165 - 145 MYA) that lived on the territory of the modern Western United States.

When they are newly hatched, they usually rest for an instant and then, along with other hatchlings, head for the deep forest as fast as their legs can carry them. After hatching, for the next few months, they need the cover of the deep forests and their only chance of survival will be to hide to predators among the vegetation. They hide beneath a dense layer of ferns and start their life-long obsession with eating. When they are newly hatched, they only weigh a few kilograms. But they will have to grow by one ton a year until their adults. That’s an astonishing 2-3 kilograms a day. When faced with danger the hatchlings, baby Diplodocus, or “sauropodlets”, lie very still and depend on their camouflage for protection.

After a year goes by, baby Diplodocus can measure over three-meters long and weigh as much as a full-grown horse. And they stick together with others in a creche for safety.

After five years, Diplodocus can measure twelve meters long and weigh over five tons. They also developed the spines and long whipped tails of adulthood. These creatures can reach full grown adult size in less than 10 years.

At full length, Diplodocus are known for being the longest of all sauropods. For protection, they move in herds of 100 or more and the most full-grown adults would be over 30 meters in length. They have long tails with elegant whip-like ends they are used for communication between members of the herd. Such a huge herd on the move attracts an array of small animals. As they eat and trample the vegetation, insects swarm around them. Each adult Diplodocus drops over a ton of dung on the prairie every day. Their teeth are more suited for soft, green leaves rather than woody branches. One of the reasons these creatures are so massive is that it allows them to have and extremely long gut which allows them to digest even the toughest of Jurassic vegetation. Like the Scutosaurus some hundred million years before these sauropods, whole leaves pass into the Diplodocus’ guts where stones they have swallowed help grind their food down so that bacteria ferment it and release nutrients. It is a process that produces a lot of excess gas. Diplodocus herds can contain a range of members, from 12-meter-long adolescents to gigantic adults…three times their size.

Appearances in the programs

Diplodocus was one of the main focus of the episode. A female Diplodocus is seen laying a clutch of 100 football-sized eggs in the middle of a forest before leaving to join the rest of the traveling herd.

The clutch of eggs was discovered by an Ornitholestes. Whilst feeding on the dead babies, several surviving baby Diplodocus emerge from underneath the ground. Fortunately for the Diplodocus, the Ornitholestes was too busy eating the already killed babies. One female sauropodlet had to rest but then joined the rest of the babies scurrying to the safety of denser forest. When they found somewhere to hide, they began eating the ferns on the forest floor - a habit that will be important for the rest of their lives. As an Ornitholestes passed by, the sauropodlets lay motionless to avoid being noticed. That time it worked, but all too often the sharp-eyed predator got its meal.

It then cut to a herd of adult Diplodocus roaming the Jurassic plains. They began feeding whilst flocks of Anurognathus began feeding, fighting and breeding on the giants. As the giants defecate on the prairies, the dung beetles come in.

An adult herd of Diplodocus are seen knocking down trees so that they could eat the ferns in-between them. Whilst doing so, they pass gas.

The creche were now looking more like adult Diplodocus, and were still in the forest feeding whilst Anurognathus cling to them. They move to a river and start drinking but they catch the scent of smoke - a sign of a forest fire. The creche flees but due to their large size, they can only amble away and the fire kills all but three of them. After the forest fire, the remaining three of the creche move out onto open prairies where they travel with a Brachiosaurus.

Eventually only two members of the creche remain. The two survivors began drinking from a lake until they saw a herd of adult Diplodocus. The creche joins the herd.

Five years later, the creche is now part of the herd. They then stop to breed. Two males clash in order to win dominance. A young male approached the female Diplodocus. Using infrasound, the female told the male that she was receptive. The male mounts the female. A couple of days later the herd had calmed and the female feeds on ferns outside the herd. However, she is being watched by a pair of Allosaurus. One chases her and leaps onto her side. The female knocks him off and flees. The other Allosaurus pursues her. She tries to make herself look bigger but nothing works. Suddenly, the long tail of a larger Diplodocus hits the Allosaurus and saves the female. She then rejoins the herd and travel ever further.

Diplodocus is one of the dinosaurs featured in this app.

Diplodocus appears in the third chapter of the wonderbook video game.

Diplodocus is part of the Walking with Dinosaurs toy line by Toyway.

In the episode "Extreme Dinosaurs", the model for Diplodocus was recolored and used for Argentinosaurus.

Its WWD/SM model is reused for the miniseries. 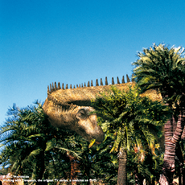 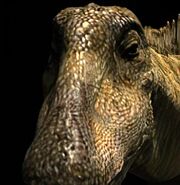 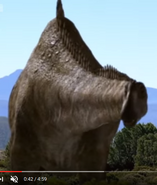 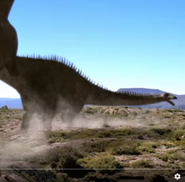 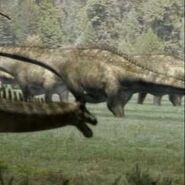 Diplodocus in The Ballad of Big Al 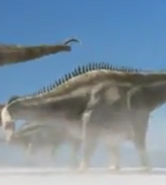 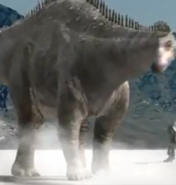 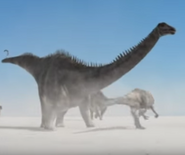 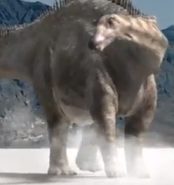 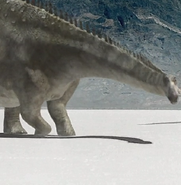 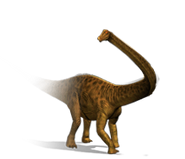 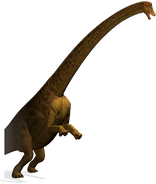 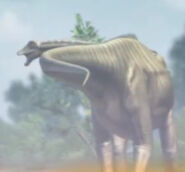 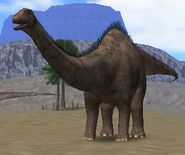 Diplodocus being attacked by an Allosaurus
Community content is available under CC-BY-SA unless otherwise noted.
Advertisement