Walking With Wikis
Register
Don't have an account?
Sign In
Advertisement
in: Creatures, Dinosaurs, Taxonomic groups,
and 10 more

Can be Small of Large and are covered in feathers, A huge claw on the second toe of each foot. Head can be robust and wide (Dromaeosaurus, Deinonychus, Utahraptor) or long and thin (Velociraptor)

Dromaeosaurs, known colloquially as raptors, are a family of theropod dinosaurs. They were found only in the Northern Hemisphere.  These carnivorous dinosaurs differed from the other meat-eaters by their light and gracile skeletons, keen senses and deadly sickle-like claws on their feet. The last raptors even had true feathers on their bodies, and possess various skeletal features that connect them with birds, especially flightless ones. 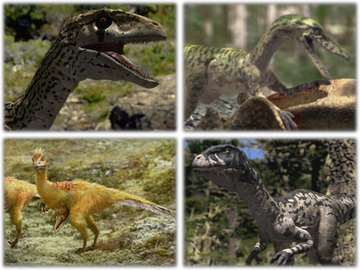 Curiously, dromaeosaurs had shrunk during the course of their evolution - from Utahraptor (6 m long) and Deinonychus (4 m long) to much smaller Velociraptor (2 m long) and even smaller Microraptor - a trend that enabled them to survive for millions of years and for their cousins to evolve into first modern birds.

Dromaeosaurs were also among the most social of theropods. Many species of them, including even the largest known, may have lived and hunted in packs, which varied in numbers and would even have family structures within them. While most theropods are now known to have lived and hunt this way in real life, raptors are the first to have been evidenced to do so.

During the late Cretaceous, a diverse range of dromaeosaurs evolved. The infamous Velociraptor lived in the deserts of Mongolia. Meanwhile in North America, raptors like Hesperonychus and Dromaeosaurus thrived.