Walking With Wikis
Register
Don't have an account?
Sign In
Advertisement
in: Walking with Dinosaurs Animals, Ballad of Big Al Animals, Time of the Titans animals,
and 20 more

Walking with Dinosaurs (Time of the Titans)
The Ballad of Big Al
Dryosaurus is a genus of ornithopod dinosaur (an hypsilophodont to be specific), which lived during the late Jurassic period (160-140 MYA) in what is now North America and Africa.

Dryosaurus had a long neck, long, slender legs and a long, stiff tail. Its arms, however, with five fingers on each hand, were short. Known specimens were about 8 to 14 feet (2.4 to 4.3 m) long and weighed 170 to 200 pounds (77 to 91 kg). However, the adult size is unknown, as no known adult specimens of the genus have been found.

A quick and agile runner with strong legs, Dryosaurus used its stiff tail as a counterbalance. Being a hypsilophodont, it probably relied on its speed as a main defense against carnivorous dinosaurs.

Though not identified, an hypsilophodont remarkably similar to Dryosaurus appeared several times as a background animal in the episode, and is presumably this animal.

A flock of Dryosaurus was seen numerous times. One notable appearance was when the flock was escaping Big Al. They escaped as a tree branch collapsed in front of Al and tripped him up, leading to his eventual death. 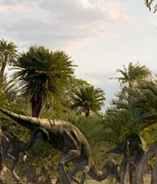