Walking With Wikis
Register
Don't have an account?
Sign In
Advertisement
in: Featured Articles, Walking with Monsters Animals, Creatures,
and 18 more


Edaphosaurus was a pelycosaur, a primitive synapsid. from the Permian. It was the first plant-eating synapsid to evolve.

Measuring more than 10 feet (3 meters) long, roughly the size of a hippo, Edaphosaurus was a large mammal-like reptile which resembled its distant relative Dimetrodon. It had a large and long sail running down its spine which was vividly coloured and patterned. However, unlike Dimetrodon, it had a small head with chisel-shaped teeth designed to grind up plant matter: Edaphosaurus was one of the first truly herbivorous reptiles.

In Walking with 'Monsters the Edaphosaurus was blue with yellow stripes. Its sail had an eye-shaped pattern on it.

In Walking with Monsters, Edaphosaurus was shown living in herds from tens to hundreds of individuals. In these large groups, they nurtured and protected their offspring.

The sail of Edaphosaurus was a sophisticated temperature-controlling device. The sail worked as a solar panel. In the morning, the creature was turn its sail towards the sun to absorb the heat. Doing this allowed it to warm up. During midday, Edaphosaurus probably turned its sail away from the sun to cool itself down.

Its sail could also be used as a method of intimidation and display. It could flush blood into the sail to create a bright pattern of color, similar to what a Stegosaurus did when it flushed blood into its plates to scare away predators. This was useful for many situations, i.e. being attacked by a Dimetrodon, but not always, as the predators of the early Permian evolved into being intelligent enough to recognize the bluff. Still, adult Edaphosaurus was practically invulnerable due to their size, and even Dimetrodon preferred to hunt juveniles instead.

Edaphosaurus' sail appears near the very end of the opening titles.

After the Carboniferous reptile Petrolacosaurus evolved into an Edaphosaurus, a herd of them were basking in the sunlight on a hill, until a juvenile was killed and eaten by a female dimetrodon. In the winter, they were storing plants for food. Later, when it was spring the Edaphosaurus herd were resting underneath the conifers to shield their sails from the sun. The next day, as the adults rested, the youngsters played and tested their strength. 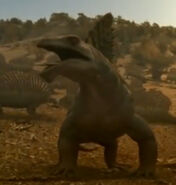 Edaphosaurus appeared in Primeval in Connor Temple's database. The image used was from Walking with Monsters.[1]

A study conducted in 2011[2] has cast doubt on the theory of Edaphosaurus' sail's use as a tool for thermoregulation. Suggesting that its only purpose was simply to attract mates.

Contrary to what Walking with Monsters states, Edaphosarus is not the world's first herbivorous reptile. This title goes to Eocasea martini[3], a caseasaur discovered in 2014.

Petrolacosaurus is not the ancestor of synapsids like Edaphosaurus. Ironically, they lived together in the same time period and the same area.

The skin texture of Edaphosaurus and Dimetrodon are slightly off. They had scutes on their skin, similar but different to the ones on crocodilians. They are believed to lack the scales of lepidosaurian reptiles. Its' also thought they could have had fur.

Some of Edaphosaurus' sounds were previously used for Embolotherium.