Walking With Wikis
Register
Don't have an account?
Sign In
Advertisement
in: Dinosaurs, Mesozoic animals, Herbivorous creatures,
and 9 more

Edmontosaurus was a large hadrosaur from North America that lived in the Late Cretaceous period.

Edmontosaurus was 4 meters (13.2 ft) high, weighed 4 tonnes, and was 12 meters (39.36 ft) long. It could run up to speeds of 50kph. Its most distinctive of Edmontosaurus is its large duck-like bill. At first glance, it appears void of any teeth, but it actually has about 2,000 cheek teeth comprised of six different tissues.[1]

After the Pachyrhinosaurus juveniles Patchi, Scowler, and Juniper were washed up on a beach after being seperated from their herd during a Gorgosaurus attack, an Edmontosaurus herd passes by them. They then follow the herd in hopes of finding food as well as their own herd. Because of her hurt leg, Juniper decided to stay behind and Patchi as well to give Juniper company. The two later find both the Edmontosaurus herd on their own afterward. 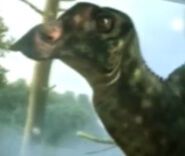 In December 2013, a new fossil revealed a fleshy comb on the head of Edmontosaurus, which is omitted from the film.