Walking With Wikis
Register
Don't have an account?
Sign In
Advertisement
in: Sea Monsters Animals, Carnivores, Cretaceous Animals,
and 13 more

Elasmosaurus (Plated Lizard) was a Plesiosaur related to Liopleurodon, Plesiosaurus, and Cryptoclidus. It reached 13–15 meters long, but much of its length was made of its neck, which consisted of 75 vertebra.

Elasmosaurus used its long neck to catch prey such as fish and squid. Like other plesiosaurs, Elasmosaurus swallowed stones to keep itself from getting buoyant. Being some of the most exciting reptiles ever discovered, elasmosaurs could save energy like dolphins do. Their small heads on their long necks may have been a way to deceive prey. Fish would be frightened by their big bodies, but the elasmosaurs could, like the more ancient plesiosaurs Plesiosaurus and Cryptoclidus, sneak their heads right into the middle a shoal, and then strike.

Elasmosaurus appeared in a cameo in the last episode of Sea Monsters, where their pack followed in the wake of Nigel Marven's ship before disappearing into the sea.

Elasmosaurus is one of the viewable plesiosaurs in the app.

A pod of Elasmosaurus swimming alongside a boat.

An Elasmosaurus about to knock the camera.

A pod of Elasmosaurus underneath the Ancient Mariner.

A pod of Elasmosaurus. 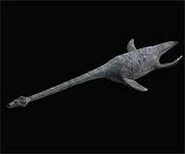 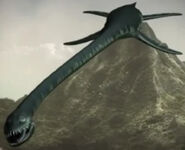 Long neck Plesiosaurs and short neck Pliosaurs are now thought to have flukes on their tails, and not smooth lizard-like tails like in the series.