Walking With Wikis
Register
Don't have an account?
Sign In
Advertisement
in: Walking with Beasts Animals, Mammals, Predator,
and 17 more

Walking with Beasts (Land of Giants)

The Complete Guide to Prehistoric Life

Entelodont was a prehistoric artiodactyl and a major antagonist in Walking with Beasts (Land of Giants).

The Bullies of the Plains, these creatures are distant relatives of modern hippos and

whales instead of pigs. They stood two meters tall, were aggressive and built like tanks, but had a brain no bigger than an orange. They were omnivorous animals from the Miocene Epoch.

In the third episode of Walking with Beasts, Entelodonts were described as "Hogs from hell" with tusks, being distant relatives of pigs, warthogs, and wild boars. Called "the bullies of the plains" in WWB, these mammals were two meters tall, aggressive, and built like tanks, but had a brain no bigger than an orange and they hunted or at least scavenged, in groups. And their worst enemies were themselves.

Entelodonts also appear bigger (or stockier) than the Hyaenodon that were apparently the size of modern rhinos themselves. Still, on occasion, Hyeanodon hunted them instead, as depicted in the book version of the WWB and later in the Land of Giants programme itself (though the Entelodont got away in the programme, most likely). 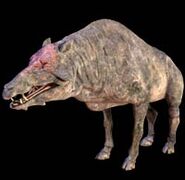 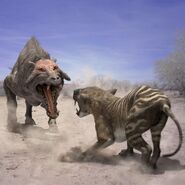