Walking With Wikis
Register
Don't have an account?
Sign In
Advertisement
in: Creatures, Creatures in Walking with Dinosaurs, Creatures in Giant of the Skies,
and 19 more

Walking with Dinosaurs: Giant of the Skies


The European Iguanodon was a species of Iguanodon from the early Cretaceous and the largest known iguanodont to have lived. It was related to the North American Iguanodon.

The European Iguanodon had the same body plan but was significantly larger than its North American counterpart.

It had long hind legs and shorter fore legs. Contrary to what was previously thought, these dinosaurs walked in a quadrupedal stance, but they ran in a bipedal manner. The thumbs on their front legs were spikes, presumably to defend themselves against predators as a last line of defense.

It had a long head with a blunt beak. Inside its mouth was a large battery of teeth designed to grind plant matter rather than to just rake the leaves off. However, this mode of feeding was less efficient than that of the hadrosaurs, who in time took over the iguanodonts' niche, causing them to die out.

The European Iguanodon was a type of iguanodont dinosaur. They were social animals that lived in vast herds. They lived in herds as a method of protection due to the fact that individually, they had barely any weapons or means of defense, aside from their spiky thumbs that they could jab at the predators. In herds, however, they could stampede, overrunning carnivores. However, living in these large herds, they would also have to constantly migrate to find new growth to feed on.

The European Iguanodon and its relatives were unique as they were the first herbivores to develop back teeth designed to chew its food. This was one of the key factors to the success of the species.

The European Iguanodon as well as its North American relative had a relationship with the nodosaur Polacanthus. This was probably to provide protection for each other.

European Iguanodon were preyed upon by the dromaeosaur Utahraptor. However, its bulk and weight may have helped it shake off its attacker. On the other hand, if there were multiple Utahraptors attacking it at the same time, it would stand little chance. However, this type of Iguanodon wouldn't have been chased by an Utahraptor, because Utahraptor didn't lived in Europe (see Utahraptor article).

As the male Ornithocheirus lands in Europe, a large herd of European Iguanodon and Polacanthus were traveling and searching for food. However, as the migrants passed, they were being watched by a pack of Utahraptors.

One female Utahraptor ambushed an individual European Iguanodon. However, without the rest of the pack, the attack was unsuccessful as she was knocked off by a quick U-turn. As the rest of the herd trumpeted at the attacker, she backed down.

The Iguanodon herd later arrived at a lake side where in the background, the male Ornithocheirus rests on his rock. As the herbivores began to drink, the Utahraptors reappeared.

Shortly afterwards, the herd detected the threat and began to retreat. One Iguanodon however, was within the reach of the dromaeosaurs and quickly bolted, with its attacker in hot pursuit. As the rest of the herd scattered, the rest of the Utahraptors jumped onto the sides of the Iguanodon and wrestled. However, the carnivores' weapons were too much for the herbivore and within seconds, it was down. The Utahraptors then fed on the corpse. 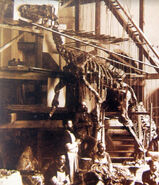