Walking With Wikis
Register
Don't have an account?
Sign In
Advertisement
in: Vertebrates, Dinosaurs, Carnivorous creatures,
and 11 more

A 5-6 meters long predatory dinosaur, Eustreptospondylus were one of the largest carnivores in their environment, and one of the local dinosaurs of Europe. They might have fed on small and medium sea animals, lizards, and pterosaurs that lived on the islands.

to be an amphibious hunter, capable of swimming from island to island and hunt both on land and in the shadows.

In the series they where depicted as part-time, amphibious hunters, but mostly as scavengers.

It was said that in fights, the loudest roar wins. This is not backed up by any actual evidence.

In the book Fire and Water a Eustreptospondylus comes through an Anomaly in a South African Wildlife reserve and attacks many of its animals. It was killed in a battle with a Postosuchus.

A Jurassic Dinosaur dubbed "The Swimming Theropod" that appears in episode 5x02 acts similarly to Eustreptospondylus portrayal in Walking with Dinosaurs and may be the said creature.

A Eusteptospondylus on the prowl

Eusteptospondylus being attacked by a Liopleurodon 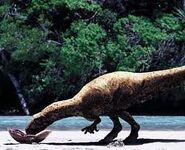