Walking With Wikis
Register
Don't have an account?
Sign In
Advertisement
in: Article stubs, Characters in Wonderbook: Walking with Dinosaurs, Creatures from South America,
and 10 more

Flint was an individual Mapusaurus from the second chapter of Wonderbook: Walking with Dinosaurs.

Flint was the main antagonist and the leader of his pack. He and his pack appeared in the first part of the chapter in an attempts to hunt down an Argentinosaurus named Thunder and his son, Storm. Later in the second part of the chapter Thunder becomes old and weak and Flint’s pack are able to kill him. Near the end of the chapter, he is knocked into a chasm by Storm and fell to his death. 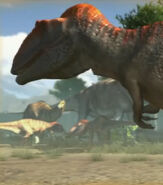 Flint and his pack stalking Thunder and Storm

Flint’s pack about to kill Thunder