Gastornis, also known as Diatryma, was a prehistoric neognath bird. It was smaller and more robust than the ​​Phorusrhacos featured in Sabre Tooth; it lived 56-41 MYA, during the Paleocene and the early Eocene. Strangely, it's been questioned whether this animal was a herbivore or a carnivore or even an omnivore.

These were the largest of birds in the Eocene. Half a ton of feather and muscles and around 2.2 meters tall (larger than the average human being). with a 45 cm skull and beak, shaped like a hatchet. Although the beak's tips weren't hooked, so this bird may have been a herbivore.

When a female Gastornis had eggs, only one egg specifically, they had to wait two months for them to hatch. These birds were fiercely territorial and, when another Gastornis got to close…females moved to protect their nest. Since the great extinction of the non-avian dinosaurs, birds were a success like mammals but, what is more, they grew big – big enough to take over the role of the large

non-avian dinosaurs. Although Gastornis was the biggest land creature of its time, it had a relatively short neck and thick legs, as opposed to terror birds of later times; in fact, despite the superficial similarities, Gastornis' closest relatives were ducks and chickens, while the terror birds (phorusracids) are actually closely related to cranes, seriemas, etc. Put otherwise, Gastornis was most likely an ambush predator, while the terror birds had to actively run down their proportionally bigger prey. There are also theories that Gastornis might have actually been an omnivorous, or even a herbivorous bird, contrary to its depiction in the program.

Portrayal in the Series

Gastornis was portrayed as the apex predator of the Early Eocene rainforests. It only laid one egg at a time. Because of its size and flightlessness, it made its nests on the ground, where its eggs and hatchlings were vulnerable to various predators.

In the Walking With series

Gastornis was shown hunting small mammals, such as Leptictidium and Propalaeotherium, and it laid its single egg on the ground, just as the modern flightless birds do. This is why a swarm of giant ants was able to kill and eat the hatchling while the adult Gastornis hunted in another part of the forest. This event foreshadowed the eventual extinction of the Gastornis species overall: as the global jungle vanished, replaced by a new scrubland (and mangrove) habitat, the giant killer birds (such as Gastornis) vanished, to be replaced by new mammalian carnivores, such as Hyaenodon and Andrewsarchus. 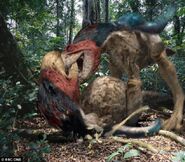 Read more at the Scribblenauts Wiki

Gastornis' design in WWB was reused for the video games Jurassic Park Builder and the Scribblenauts series.

The Diatryma from Ice Age shares the same colors as the WWB Gastornis, only arranged in a different pattern. Unlike in WWB, they are correctly shown to not be apex predators.

Retrieved from "https://walkingwith.fandom.com/wiki/Gastornis?oldid=59318"
Community content is available under CC-BY-SA unless otherwise noted.