Walking With Wikis
Register
Don't have an account?
Sign In
Advertisement
in: Article stubs, Walking with Dinosaurs 3D Characters, Characters,
and 14 more

Gorgon is a Gorgosaurus and the main antagonist in the Walking with Dinosaurs: The Movie.

Gorgon first appears during the forest fire. He has two other gorgosaurs with him, possibly his family members. Patchi makes the mistake of attracting the attention of the horgosaurs, and they give chase. Gorgon pursues Scowler and Patchi, while his packmates corner his mother and three siblings, implied to have killed them offscreen. The young pachyrhinosaurs hide under a fallen tree, in the hopes that the smoke will hide their scent. Unfortunately, Gorgon manages to find them, and goes for the kill. Bulldust intervenes and the two engage in a breif fight to the death. Sadly, the fight ends when Gorgon mauls Bulldust's leg, and then gives the killing blow by biting his throat. Patchi and Scowler could only look on mournfully.

Later on, Patchi and his brother have moved into Juniper's herd, and are migrating. In Ambush Alley, Gorgon and his pack spot them once more. The pack attacks and seperates the weak and the small from the herd, cornering them at a raging river. Gorgon manages to grab one pachyrhinosaur by the neck, and slam it to the ground, before going for the kill. During this, Juniper falls into the river, and Scowler and Patchi tumble after her.

Several years later, after Patchi returns to the herd following a fight with Scowler, Gorgon and his pack attacks the herd again. This time, Scowler is his target. Though he puts up a good fight, the pachyrhinosaur is helpless as Gorgon prepares to make another kill, the rest of his pack waiting to begin the feast. The site reminds Patchi of his father's demise and he rallies the rest of the herd to fight back. Gorgon seeminly has the upper hand, but he makes the mistake of putting his left arm through the hole in Patchi's frill. The pachyrhinosaur suddenly lowers his head and breaks the gorgosaur's arm, causing him to roar in agony. Taking advantage of this, Patchi fights back, headbutting him so hard that he looses some of his teeth. Realising that he's no match for the determined pachyrhinosaur Gorgon and his pack retreats, leaving his fate unknown.

70 million years later, Uncle Zack and Jade uncover his fossilised skeleton. Ricky completes the fossil by placing his tooth (which was found somewhere else for some reason) back into his jaw.

As the movie ends with Alex flying off into the valley, Gorgon suddenly breaks through the screen before it fades to black and roars at the audience.

Gorgon is shown to be the best hunter and the strongest of his pack. He was the only one that fought the three leaders of the pachyrhinosaur herd. His hunting style is very good for ambushing with his pack as seen at Ambush Valley quite possibly his territory. His speed is fast enough to catch up to a herd of dinosaurs even his speed was good enough to catch pterosaurs. He has great energy or possibly stamina that he has been able to fight for while and been able to run being so much injured. 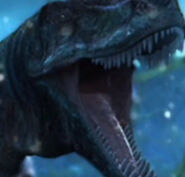