Walking With Wikis
Register
Don't have an account?
Sign In
Advertisement
in: Dinosaurs, Tyrannosaurs, Walking with Dinosaurs: The Movie Animals,
and 25 more

“Walking with Dinosaurs 3D: A Reusable Sticker Book”
Gorgosaurus was a tyrannosaurid theropod dinosaur that lived during the late Cretaceous period. This dinosaur was an earlier relative of Tyrannosaurus rex and Tarbosaurus.

Gorgosaurus was a tyrannosaurid similar in size to other tyrannosaurs like Albertosaurus and Daspletosaurus but smaller than Tyrannosaurus rex and Tarbosaurus. Gorgosaurus reached an adult size of roughly 26–30 feet(8–9 meters) long and just over 3 tons in weight. It lived alongside Daspletosaurus so it is possible that the two species were rivals. Gorgosaurus hunted large dinosaurs like hadrosaurs, ceratopsians, and ankylosaurs and, like most other animals, may have been cannibalistic.

Gorgosaurus' main features are two horn-like bumps on its head above the eyes. They were probably used for display as these would be no use in battle, unlike horned ceratopsians. In that case, they would've been brightly colored.

Gorgosaurus is shown to be bright blue with yellow under the chin to the belly and tail included with very bright black stripes. Some are munch darker colors of blue or green then blue.

Like Albertosaurus, Gorgosaurus had large, muscular legs. It's been theorized that Gorgosaurus would have been extremely fast, especially for a large animal. Gorgosaurus likely had a top speed of around 48 kilometers per hour (30 miles per hour).the dino eats other dinos

A Gorgosaurus named Gorgon is the primary antagonist in the new movie.

Gorgosaurus is one of the dinosaurs featured in Wonderbook and plays a similar role as in the movie.

The depiction of Gorgosaurus was incorrectly named Nanuqsaurus in Walking with Dinosaurs: Prehistoric Planet 3D, when the movie states it is a Gorgosaurus. It was renamed, though, to be more accurate, since the Gorgosaurus species found in Alaska where the movie took place was no longer valid and the formation now has Nanuqsaurus as the theropod, which is much smaller than even Gorgosaurus.

Gorgosaurus appeared in the ITV TV film March of the Dinosaurs. Unlike the pack hunter Albertosaurus, this was a solitary hunter instead. 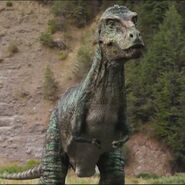 Gorgosaurus in a fire 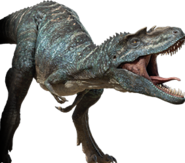 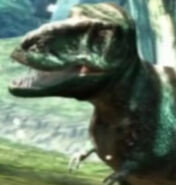 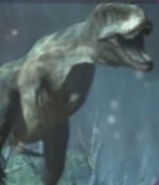