Haikouichthys was a prehistoric fish, notable for being not only the very first fish, but also the oldest, most primitive known backboned animal (vertebrate).

They grew to the size of a man's thumb, with a segmented, streamlined body and a single dorsal fin that merged with the tail. Along his side, Haikouichthys had from six to nine gills and multiple circular structures on his bottom that could be gonads or slime organs (as seen in modern hagfish). He lived during the Lower Cambrian period in China, some 525 MYA.[1]

Although they were the size of a human's thumbnail,

Haikouichthys was an evolutionary giant. They were some of, if not, the first ever fish, our earliest known ancestors. They were unique because instead of having armor on the outside, they're tough inside: they had a primitive back bone. They're some of the very first vertebrates, forerunners of all future backbone animals from the dinosaurs, to the elephant, to humans. Their flexible back-bone made them more maneuverable than even the spineless Anomalocaris. They could scavenge flesh and then dart away unharmed.

Haikouichthys was most likely a scavenger, as he was depicted in the first episode of Walking with Monsters, where a school of Haikouichthys fed upon a wounded Anomalocaris.[2]

A school of Haikouichthys were seen in the first half of the episode. They harassed a wounded Anomalocaris after it lost a fight. In the end, one started evolving into Cephalaspis. 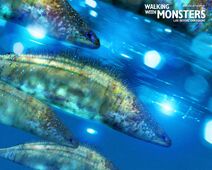 Retrieved from "https://walkingwith.fandom.com/wiki/Haikouichthys?oldid=63371"
Community content is available under CC-BY-SA unless otherwise noted.