Half-Tooth was a male Smilodon and protagonist of the Walking with Beasts episode Sabre Tooth.

At 4 years old, Half-Tooth took over a pride and reigned over his territory ever since. In his takeover, one of his saber fangs was broken, leading to his name.

3 years later, a now 7 year old Half-Tooth and his pride had returned from a successful hunting trip when a pair of young male Smilodon appeared and challenged him for control of the territory. Though he bravely tried to hold them off, Half-Tooth was no match for two much younger males and was finally forced to run, fleeing his home to live in exile in the wilderness.

Unable to hunt by himself, Half-Tooth was able to eke out a living as a scavenger, chasing smaller predators off their kills to feed himself. He made it a habit to patrol his old scent-marking posts, examining the brothers' urine scents for a sign of weakness. One day, three months after losing to the brothers, Half-Tooth discovered one of the usurpers had stopped marking some time ago. Seeing his chance, Half-Tooth returned to his domain, roaring his challenge to the surviving brother. The two cats began a ferocious battle of youth vs experience. After a brief but brutal fight, Half-Tooth defeated the pretender to his throne and mortally wounded him. The battle won, the deposed king returned to his pride and retook his usual basking spot. 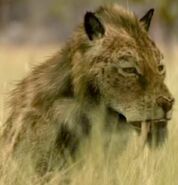