Walking With Wikis
Register
Don't have an account?
Sign In
Advertisement
in: Theropods, Birds, Coelurosaurs,
and 17 more

Sea Monsters: To Hell... and Back?


Hesperornis was a flightless bird from the Cretaceous. Due to its design, it was cumbersome on land but was a fabulous swimmer.

Hesperornis was a large, flightless bird. It had small legs and its toes were flat and clawless. Its wings were tiny.

Hesperornis had a long, stalk-like neck. It had a long head and its beak was lined with needle-sharp teeth.

In Sea Monsters, Hesperornis had black feathers, a red head and legs and a golden beak.

Hesperornis was a large flightless seabird. It lived in large colonies that would spend most of their time basking on the sea shore. In these groups, they were extremely vociferous. On the shore, they were at risk of attack by dinosaurs like Tyrannosaurus rex.

Due to the fact that its legs were positioned too far down its body, almost along the tail, and its wings were too small to provide counterbalance Hesperornis couldn't fly and couldn't move efficiently on land or even stand upright, but rather crawled around, like modern loons and grebes do. However, just like the modern loons and grebes, once under water, Hesperornis was agile and maneuverable. It could accelerate and make sharp turns, perfect for underwater hunting. Unfortunately, during the Cretaceous, the seas were far more dangerous than the land.

Hesperornis were preyed upon by mosasaurs, carnivorous fish like Xiphactinus and sharks.

Nigel Marven arrived in the centre of a Hesperornis colony in the Cretaceous. He observed the birds basking on the shore of the sea. He watched as a pair fought and as some of them dived into the water. There, the seabirds chased a shoal of fish.

Nigel, on his speedboat, spotted a blood patch in the water. Using a periscope, we watched as some Hesperornis were attacked and killed by a group of predators including Halisaurus, Xiphactinus and sharks.

A Hesperornis being Eaten whole by A Xiphactinus. 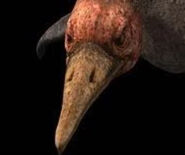