Chased by Dinosaurs (Land of Giants)


This iguanodont, which is likely based on footprints of large ornithopods found in South America lived during the middle and late Cretaceous period in Patagonia, was featured in Land of Giants.

The iguanodont is shown as prey to larger predators like the giant theropod Giganotosaurus and the crocodylian Sarcosuchus.

When Nigel Marven entered the Cretaceous he spooked and scared away a herd of iguanodonts by accident. The next day Nigel saw one of them fleeing and followed a trail of blood running down a stream. He found a severely injured Iguanodont slowly succumbing to its wounds. He later saw a Giganotosaurus feeding on the carcass. It then held it aloft and carried it away.

Whilst driving through open plains Nigel saw an iguanodont running beside his vehicle. He then looked behind him and saw the reason why it was running - a Giganotosaurus was chasing it down.

A pair of Giganotosaurus attacking some Iguanodonts 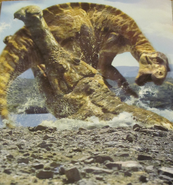