The insects are the most advanced of the terrestrial invertebrates, distinguished from them by having three body

parts (head, thorax and abdomen), always six legs, and usually two or four wings. The series featured by Impossible Pictures often make use of insects, either CGI's or taken from real life.

Insects are some of the most successful creatures on the planet. The oldest fossilized insect fossils date 400 MYA - the Devonian epoch. At that time they were only few millimeters in length. But that changed during the Carboniferous.

As seen in Reptile's Beginnings (WWM), the Carboniferous time period had a heyday of insects and other invertebrates is shown. This time period (354-290 MYA) was marked by extreme amounts of oxygen in the air that fueled the growth of huge invertebrates, including insects such as the giant dragonfly Meganeura with a 100-cm. wingspan (as large as some of the modern eagles).

In many ways it was identical to the modern dragonflies, but depended on the greater amount of oxygen in the air to thrive: when the oxygen levels began to drop at the end of the Carboniferous, Meganeura and other giant invertebrates perished, leaving behind their smaller descendants.

Walking with Dinosaurs shows several of these descendants. Small dragonflies (filmed in real life) and damselflies were featured in the first two episodes of these series. They still hunted insects, but were now hunted by pterosaurs such as Peteinosaurus and Anurognathus in their turn.

WWD episode Time of the Titans featured some dung beetles too (filmed in real life, just as all of the other WWD insects - that's why the beetles are so drab- and modern-looking). They probably fed on the dung of the various dinosaurs of the late Jurassic time period featured in that episode, just as their descendants fed on the antelope dung in the second episode of Walking with Cavemen.

WWD episode "Cruel Sea" featured a cameo of bark beetles when a juvenile Rhamphorhynchus tried to extract them from the bark.

WWD episode Giant of the Skies featured a wasp that was feeding on the first flowers that had evolved only by the time of the early Cretaceous time period (127 MYA in the ep). 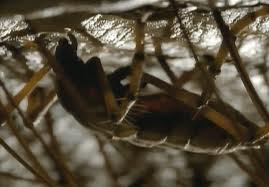 This theme - of a symbiosis between flowering plants and insects was mentioned later, in a cameo of the last WWD episode (Death of a Dynasty), when it featured a pollinating butterfly, in place of a wasp. It also showed an ancient species of flea, Saurophthirus, in a cameo as it fed on blood of an old male Ornithocheirus.

Insects had survived the K/T extinction that killed of the dinosaurs and the other giants of the Mesozoic, and went on to thrive in the Cenozoic as well. Walking with Beasts and Walking with Cavemen features some of these insects, including giant ants that successfully attacked and killed a Gastornis chick (New Dawn),

some bark beetles fed upon by a nocturnal Godinotia (ditto), termites, fed upon by Australopithecus (Next of Kin) and Paranthropus (Blood Brothers), and various biting midges that harassed the mammoths (Mammoth Journey). All of them (except for the giant ants from New Dawn) were filmed from real life and all of them played a background role in the series, but they were present and they were active in the ecosystems of the Cenozoic.