Long with a robust head.

Sea Monsters (To Hell... and Back?


Leedsichthys was a giant fish that grew to 17 meters in length and possibly weighed up to 40 tonnes. It was one of the largest creatures in the Jurassic seas, outweighing even the huge pliosaur Liopleurodon.

Like modern whale sharks and baleen whales, Leedsichthys was a gentle giant that lived on shrimp, jellyfish, fish, and plankton. It would have swum slowly through the upper waters of the ocean, taking mouthfuls of plankton-rich water and sieving them through the giant mesh-plates at the back of its mouth. Its feeding habits were similar to those of modern baleen whales. It was a ray-finned fish, making it a relative of most fish living on Earth today.

They traveled long distances to find parts of the world where seasonal conditions caused plankton to form into a dense, concentrated, organic soup. Occasionally, after plankton feasts, Leedsichthys would shed the giant filter plates from the back of its mouth, meaning it was unable to feed for several weeks.

Just because of Leedsichthys' monstrous size didn't mean that the only predator that could have attacked it was Liopleurodon. Hybodus, Metriorhynchus and other marine carnivores might chance an attack if it is sightly away from the school, because the slow Leedsichthys wouldn't attack back.

of all time. Nigel Marven swam with the shoal but then noticed an old and ill individual. The fish was frequently attacked by creatures like Metriorhynchus and Hybodus whilst the rest of the shoal swam ahead of it.  The Leedsichthys later succumbed to its wounds and died. It was later found by a Liopleurodon. During the night, the carcass was scavenged on by a pod of Liopleurodon. 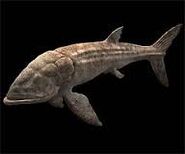