Jurassic period
160 to 155 million years ago

Walking with Dinosaurs, Cruel Sea
Sea Monsters, To Hell... and Back?
Liopleurodon was a species of large pliosaur from the late Jurassic period. It lived in the deep seas near the European coastlines, in vast territories.

With a maximum length of 25 meters, this creature was one of the largest carnivores to exist.

Liopleurodon was a very large pliosaur. It had the fundamental characteristics of the typical pliosaur, such as a large, heavy skull supported by a short neck. Its jaws carried a row of protruding, needle-sharp teeth. It also had powerful nostrils which were used to pinpoint the scent of its prey.

Each of Liopleurodon's four flippers was three meters in length. By alternately flapping its flippers, it managed to propel its huge bulk effortlessly through the Jurassic waters.

They were known to have most likely given live birth to their offspring.

Being one of the largest carnivores to have existed, Liopleurodon was the apex predator of every area it lived in. Liopleurodon had a variety of prey consisting of sharks, marine crocodiles, ichthyosaurs, other pliosaurs, and the largest fish that ever lived, Leedsichthys. Not even terrestrial prey such as Eustreptospondylus was safe from the large marine reptile. It would also occasionally scavenge carcasses. Because of its reputation, other predators would flee upon seeing Liopleurodon and would only attack individuals when they were wounded.

This species of pliosaur lived a more aquatic lifestyle than other plesiosaurs like Cryptoclidus due to its large size. Their size also made them territorial and they would fight for space. Adult Liopleurodon were constantly in danger of being beached if they got to close to the islands.

Juveniles lived in the shallows until they were old enough.

The candidate for the ancestors of plesiosaurs are the nothosaurs of the Late Triassic. Liopleurodon, in particular, belongs to a group of plesiosaurs called pliosaurs that had short necks and large heads.

Liopleurodon appears in the series' intro at the 0:11 mark until 0:13.

A Liopleurodon comes out from the water and snatches a Eustreptospondylus off a rocky outcrop just before the title card of the episode is shown.

A male Liopleurodon later tears a female Ophthalmosaurus in half when she was having trouble giving birth. The male later encounters a female who he engages in a territorial dispute. The bull wins the fight by biting the female's left hind flipper and as she leaves her bleeding wound attracts Hybodus sharks that most likely kill her. The male Liopleurodon was one of the victims of the storm that occurred at the end of the episode. His cause of death was being beached and being consumed during his last moments of life by multiple scavenging Eustreptospondylus.

Liopleurodon is one of the creatures listed on Nigel Marven's Time map.

Liopleurodon is the main hazard of the Jurassic seas and that makes them the second deadliest seas of all time.

A Liopleurodon is attracted to the carcass of a Leedsichthys that Nigel witnessed die at the hands of a Metriorhynchus and a Hybodus earlier. He catches this large marine reptile on his radar and commands his shipmate Peter to bring out the Pole camera so he can watch a video feed of the creature. Nigel gets a glimpse of the Liopleurodon, but it becomes frightened by the underwater camera. Amazed by what he saw, Nigel Marven decides he would like to go underwater with the reptiles.

Before he does this, he and his crew decide to test a suit capable of releasing a chemical that would deter Liopleurodon on two young individuals. The test is completed using a mannequin filled with squid wearing the specialized suit. They first use shark repellant, but this fails to deter the hungry Liopleurodon. The crew then use the chemical Putrescine, which emits a foul smell, for their next experiment. The second experiment successfully drew away the pliosaurs with the closest to an aggressive action from them being a nudge. This greenlights Nigel Marven's dive with them.

During the night Nigel took a swim in the Jurassic seas, he witnessed a pair of two Liopleurodon feasting on the Leedsichthys carcass. Nigel Marven decided to get closer to frenzy, but one of the pliosaurs swam too close to Nigel causing him to release the Putrescine he had and to depart from the dangerous waters where he then proceeded to time travel to the Late Cretaceous.

Liopleurodon was one of the few creatures featured in the Walking with Dinosaurs pilot. Like in its appearance in Cruel Sea, the animal ended up beached on the shore.

No Liopleurodon specimen or any pliosaur was ever 25 meters in length or 150 tonnes. Estimates of real Liopleurodon say it was 6-12 meters in length with an estimated weight of fewer than 2 tonnes[1][2] and the largest pliosaur, Pliosaurus funkei, is estimated to have been only 10-12 meters long.[3] According to the ABC website and the now removed BBC website, what inspired the production team to make Liopleurodon over 20 meters was based off a skull fragment from the Natural History Museum[4], but this estimate has been considered dubious at best.[5] Another reason for the greatly exaggerated size was the Aramberri pliosaur. Reported to be an 18-meter juvenile, which would have grown even larger when matured, and reported as a Liopleurodon, this was the true source of inspiration for BBC's Liopleurodon. However, today many views have changed. No longer is it thought to be a juvenile and its size has been revised to 11-12 meters. Whether it was a Liopleurodon is still unclear.

However, there have been isolated fragments, found in England, that indicate pliosaurs of huge size. The largest is the macromerus pliosaur from Oxford. While it has been assigned to the genus of Liopleurodon, it has also been assigned to the genus of Pliosaurus and its true identity is still in debate. It's lower jaw alone, despite being incomplete, is still almost 3 meters long. This would mean that the whole pliosaur would have been 13-15 meters long and weighed in at 30-40 tonnes. While far from the BBC's Leviathan, this would still make it one of the most massive marine predators to have ever existed, in the same class as Sperm whales and Megalodon.

Long neck Plesiosaurs like Cryptoclidus and short neck Pliosaurs like Liopleurodon are now thought to have flukes on their tails, and not smooth lizard-like tails.

In The Complete Guide to Prehistoric Life, it is mentioned that Liopleurodon might have lived in Central America. The specimen they are referring to is "The Monster of Aramberri", a large pliosaur discovered in Mexico that some considered was a Liopleurodon ferox individual[6] though it is now thought to belong to another genus or its own.[7][8][9]

The design of Liopleurodon from Walking with Dinosaurs and Sea Monsters is very iconic with various toys and restorations of it and its relatives being based on the Walking with... series' Liopleurodon. 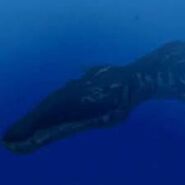 Retrieved from "https://walkingwith.fandom.com/wiki/Liopleurodon/Generation_1?oldid=56925"
Community content is available under CC-BY-SA unless otherwise noted.