Walking With Wikis
Register
Don't have an account?
Sign In
Advertisement
in: Dinosaurs, Carnosaurs, Carnivores,
and 17 more

Wonderbook: Walking with Dinosaurs
Mapusaurus is a Theropod Dinosaur from South America.

Mapusaurus was a large carcharodontosaurian and a relative of Carcharodontosaurus and Giganotosaurus. This dinosaur has varying size estimates. Sizes as low as 32 ft. (9.7 meters) long and 3 tons have been published. Others, as high as 46 ft. (14 meters) long and 8 tons in weight have also been recorded. Mapusaurus was probably somewhere in the middle, about 40-42 ft. (12.1-12.8 meters) long and 5-6 tons. This makes it one of the biggest land predators yet found. A group of 6 adults and juveniles was uncovered, but whether this was an actual pack or not isn't known. This dinosaur lived in South America roughly 100-90 MYA.

Mapusaurus appears in Wonderbook: Walking with Dinosaurs using a design similar to the Mapusaurus in Planet Dinosaur. It will most likely be shown as a pack hunter that preys on Argentinosaurus. In Chapter Two : March of the Titans, a Mapusaurus named Flint and his pack stalk an Argentinosaurus named Thunder and his son, Storm. 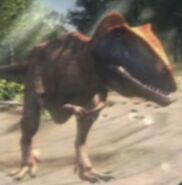 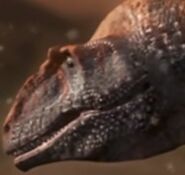 A closeup of a Mapusaurus head

Mapusaurus was depicted as a large pack hunter in Horizon's Extreme Dinosaurs (Extreme Dinosaurs is featured in the Special Features section of Chased by Dinosaurs). They used the same model for Allosaurus from Walking with Dinosaurs, only in a darker green.

Mapusaurus also appeared in BBC's Planet Dinosaur. Like Extreme Dinosaurs, it was shown as both a pack hunter and a scavenger.