Miocene to Pleistocene
16 to 1.6 million years ago


The Megalodon ("Big Tooth") was a large shark that lived from the Miocene to Pleistocene epochs. It was the largest predatory fish to ever exist.

Measuring as large as 30 feet (9 meters) to 53 feet (16 meters) in length and weighing more than 50 tons, Megalodon, being a member of the same genus as the great white shark, closely resembled one but was far larger. Some specimens of Megalodon have been estimated to reach sizes in excuss of 59 feet (18) in length and weighed around 70 tons. It had several rows of sharp, serrated teeth within a pair of jaws that could deliver a crippling bite.

Megalodon were solitary animals as they were large enough to hunt game independently. However, whilst adults hunted large prey in the open oceans, juveniles survived in the shallow waters, hunting smaller prey. There, the adolescents would mainly hunt small cetaceans like Odobenocetops. A fully grown Megalodon would hunt whales.

A special adaptation that Megalodon evolved was a protective membrane which was located at the back of its eyes. When attacking its prey, it would roll its eyes to reveal the membrane. Sight would not be necessary in an attack as its sense of smell would steer it towards its prey. Megalodon's sense of smell was incredibly powerful. They could detect blood from miles away.

A juvenile Megalodon was seen swimming above Nigel Marven and an Odobenocetops who was foraging for oysters in some kelp. By taking cover in the foliage, they were able to avoid being caught by the shark.

With a shark camera in hand, Nigel tried to pin it onto the shark's dorsal fin but he was unable to reach it. As Nigel's crew teased the Megalodon by continuously raising and dropping the chum bag into the water, the Megalodon became more frisky, attacking Nigel's cage in frustration.

Continuing from the previous episode, it was revealed that the Megalodon didn't eat Nigel, it just knocked him off the metal platform he was standing on. Scared out of his skin, Nigel darted out of the water and once again tried to pin the camera to the Megalodon's dorsal fin. However, this time Nigel actually succeeded.

Nigel's crew detached the chum bag from the boat and allowed the Megalodon to eat it. As it did so, it swam off.

Days later, the camera that was attached to the Megalodon emerged from the water. Using a tracking device, Nigel was able to track down the whereabouts of the camera. When he and his crew watched the recorded footage, they watched the Megalodon hunt a large whale. The force of the attack knocked off the camera. 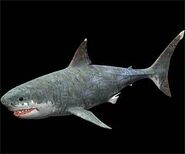 Megalodon's model was reused for Squalicorax in To Hell... and Back?.

Stock footage of Megalodon from its Sea Monsters appearance was reused for the episode Awesome Ancestors of the Animal Planet series The Most Extreme.