Megalograptus was a small eurypterid from the Ordovician. These sea scorpions are famous for being among the first creatures to come onto dry land.

Megalograptus belonged to a group of marine arthropods called eurypterids. These animals were marine scorpions which lacked the stinger on the tip of their tail and were replaced with a fluke.

It had long arms with lots of spines ranging in size running down the length of them.

When attacking other animals, Megalograptus used its sharp pincers and spiny arms to shear and tear apart its victims. Using its mandibles, it would force the meat into its mouth. It mainly hunted arthropods such as trilobites, early fish and even other sea scorpions.

One feature of Megalograptus and other sea scorpions that made them unique was that they were the first animal to walk onto land. Although they typically ventured onto land to feed on any the sea threw up, groups of Megalograptus would come onto the shore to reproduce en masse.

On his journey to the Ordovician, Nigel Marven caught an Astraspis to tempt a Megalograptus to approach him. Once one approached him, he grabbed it and lifted it out of the water. Nigel then released it and allowed it to feed on the fish. However, once it finished off its meal, it moved onto Nigel and attacked him. Nigel escaped with only a cut.

Later, whilst Nigel was using a trilobite fitted with a camera to record a Cameroceras, a Megalograptus approached the camera and fed on the trilobite. Fortunately for Nigel, he repelled it by knocking it off. Later, on a dive, Nigel saw several Megalograptus gathering and moving to shallow waters to breed. Some were eaten by a Cameroceras in the process.

When Nigel returned to land after the dive, the shore was teeming with Megalograptus, which were reproducing in a group gathering. When Nigel left his boat, the scorpions began drill the boat before being thrown off by Nigel. 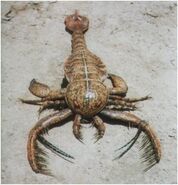