Walking With Wikis
Register
Don't have an account?
Sign In
Advertisement
in: Sea Monsters Animals, Armoured animals, Carnivores,
and 13 more

It lived in shallow waters and had a fish-like tail, and although it was distantly related to modern day crocodiles (the eusuchians), Metriorhynchus became completely aquatic: its feet became flippers and it lost the body armor typical of the crocodilians, so its only hope of escaping predators such as Liopleurodon was its speed.

Metriorhynchus fed mainly on aquatic animals such fish and ammonites, but it could also leap up from the water to snag pterosaurs that flew too low with its scissor-like jaws.

Unlike other crocodiles, Metriorhynchus gives birth to several live infants. The mother probably did not take care of her young for very long. They spent most of their time in shallow waters catching anything their size allowed. But sometimes Metriorhynchus came to deeper waters, though this was very rare, usually when hunting the giant fish Leedsichthys. 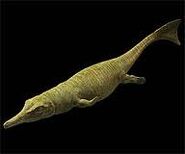