Walking With Wikis
Register
Don't have an account?
Sign In
Advertisement
in: Mammals, Elephants, Walking with Beasts Animals,
and 17 more

The Moeritherium species were pig-like animals that lived about 37-35 MYA, and resembled modern tapirs or small hippos (they are not believed to be related to either of those animals, however). They were smaller than modern elephants, standing only 1 meters (3 ft) high at the shoulder and were about 3 meters (10 ft) long. They are believed to have wallowed in swamps and rivers, filling the ecological niche now filled by the hippopotamus.

The shape of their teeth suggests that they ate soft water vegetation. It was related to elephants, as indicated by the primitive trunk it may have possessed. They were amphibious like Arsinoitherium was.

The shape of the skull suggests that Moeritherium actually did not have an elephant-like trunk, but rather a broad flexible upper lip like a tapir's for grasping aquatic vegetation. The second incisor teeth formed small tusks, although these would have looked more like the teeth of a hippo than a modern elephant.

As amphibious mammals, these creatures were too large to be bothered by the usual predators such as crocodiles or sharks. Water wasn't usually a dangerous place for these animals. They spent most of their days in the water.

Initially, Moeritherium were seen underwater, in the mangrove swamps (which, ironically, would become the Sahara desert in modern times), where they fed in the coastal mangrove swamps on sea grass. A female Basilosaurus attacked a Moeritherium that had wandered from the others in search of other greenery and got it stranded on a sand bank. Luckily, the Moeritherium managed to escape all the same. 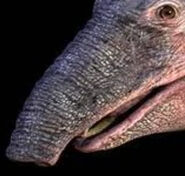