Walking With Wikis
Register
Don't have an account?
Sign In
Advertisement
in: Walking with Dinosaurs Episodes, Walking with... trilogy, Episodes,
and 3 more

By a river, a female Coelophysis stalks a herd of dicynodonts called Placerias, looking for weak members to prey upon. Downstream, a male cynodont resides in a burrow with his family. A female Postosuchus, a rauisuchian and one of the largest carnivores alive in the Triassic, attacks the Placerias herd, and wounds one individual; the herd scatters, leaving the wounded Placerias to the Postosuchus. Early pterosaurs called Peteinosaurus are depicted feeding on dragonflies and cooling themselves in the little water remaining during the drought. Still searching for food, the female Coelophysis, alongside another member of her species, discovers the cynodont burrow; the male wards them off. Later that evening, after he goes off hunting, an inquisitive pup follows the male to the entrance and is caught by the female Coelophysis. At night, the cynodont pair eat their remaining young and then move away. On the next day, the Coelophysis work to expose the nest. The female Postosuchus is later shown to have been wounded by the Placerias, a prior attack on them leaving her with a tusk wound on her thigh. After being unable to successfully hunt another Placerias, she is expelled from her territory by a rival male. Wounded, sick, and without a territory, the female dies and is eaten by a pack of Coelophysis. As the dry season continues, food becomes scarce. The Placerias herd embarks on a journey in search of water, while the Coelophysis begin to cannibalise their young, and the male cynodont also resorts to hunting baby Coelophysis at night. Finally, the wet season arrives; the majority of the Coelophysis have survived (including the lead female), and the cynodont pair have a new clutch of eggs. The episode ends with the arrival of a migrating herd of Plateosaurus, foreshadowing the dominance of the sauropods after the Triassic–Jurassic extinction event.

In the credits it is explained that 20 million years later, the aforementioned extinction wiped out many reptile species, but the dinosaurs continued to evolve; carnivores grew to massive sizes while their prey became even larger, setting the stage for the next episode with the giants of the Jurassic. 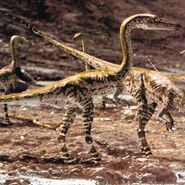 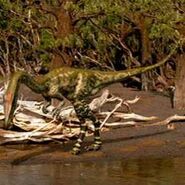