Walking With Wikis
Register
Don't have an account?
Sign In
Advertisement
in: Walking with... trilogy, Walking with Beasts, Animals from Africa, Episodes

Next Of Kin is the fourth episode in Walking with Beasts series. It depicts Pliocene Africa, focusing on the trials and tribulations of a group of australopithecines.

A family group of Australopithecus afarensis is down on its luck; yet another female died from malaria, leaving behind an orphan son. The males of the group, Grey and Hercules, are beginning to challenge each other for leadership, and the females are supporting Hercules rather than Grey, particularly a female aptly nicknamed Babble, who hates him and after the matriarch's death, has taken over. A bigger, more numerous group of Australopithecus attacks, driving the focus group from their old home. Because of this, they start to migrate through the highlands of Ethiopia, searching for a new one.

Shortly after the Deinotherium encounter the australopithecines discover a new place to live: at first it seems to be uninhabited by other large mammals, except for Ancylotherium, and not even australopithecines are scared of them. However, this is also a home of Dinofelis, a sabre-toothed cat that specializes in hunting prey such as Australopithecus. Dinofelis begins to hunt australopithecines and successfuly too. The family group is shrinking further.

However, the situation begins to improve: a new female arrives... Causing new tension between the males of the family group, Grey and Hercules. Eventually, discovering the usage of a stick as a weapon, Hercules defeats Grey and becomes the new leader of the family group.

Eventually the Dinofelis returns and attacks australopithecines once more. Blue, the Australopithecus youngster orphaned at the beginning of the episode, is almost captured and killed by the cat when the rest of the family group rallies together and chases Dinofelis away with sticks and stones. As the carnivore is driven away and australopithecines begin to groom each other, the narrator points out that they have a long journey to travel yet, but it's a start.

A group of Australopithecus

A Dinofelis with the dead body of a Australopithecus.

An Ancylotherium walking across a rocky plain. 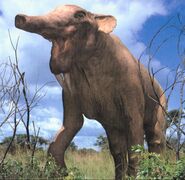